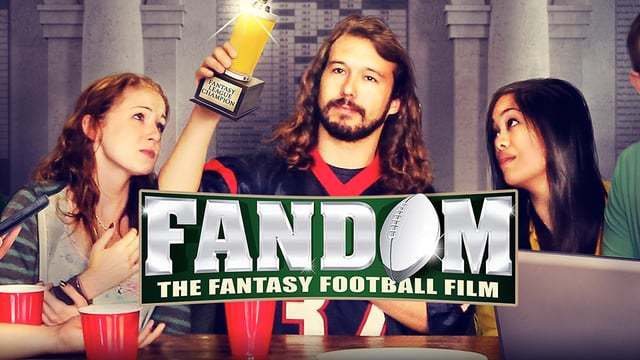 With millions of fantasy football fans like myself starting their leagues this week, this is a great time to take a look at a documentary covering the fastest growing hobby in America.antasy football has exploded over the past few years with more and more people figuring out what the fuss is all about.

Fandom takes a look at fantasy football from several different angles to see what is so special about a hobby that was once just for stat geeks. It was produced by Andrew Aronow and features real fantasy players, fantasy football experts, and some NFL players.

The most interesting part of Fandom to me is where the film explores the big money leagues. $25,000 buy-in leagues are no joke. Former financial brokers, guys with backers in their leagues? Insane, right.

It just sounds crazy on the outside. But letting big sums of cash ride on NFL fantasy football is very similar to betting on the stock market on a week to week basis. It’s all numbers, trends, late breaking news, and some gut feelings.

One of the big money players featured was Chad Schroeder. This high roller said that he once won a fantasy tournament that netted him about $250K, but the company went bankrupt! So he was out his $25K entry fee and his winnings.

Incredible, but not as insane as his statement that “Every dime I currently have come from sports gambling and fantasy football.” Dude was living comfortably by the way.

Schroeder and the guys in his league were on one end of the spectrum in Fandom. The documentary also took a look at the average Joes playing fantasy football.

These guys were more relatable to most fantasy players. During their draft, beer is mandatory, insults fly from all directions, and each player thinks he is a fantasy football genius.

“Chotzi” was the weirdest and the guy who drafts with his heart rather than his brain. If you have ever watched FXX’s “The League,” then you will have an idea of the type of nuts we’re talking about, although the real life guys are obviously more toned down than the guys on the TV show.

The film took a look at how many women are joining fantasy football leagues, some just to have something in common with their husbands or boyfriends. One lady even gave tutorials over wine with her friends to teach them about football and how to play fantasy ball.

We got to take a look at individual matchups as the NFL season played out. This is a good primer for fantasy football newbies, complete with graphics to show how the winner managed to get over on their opponent. For me, I could have done without the matchups.

I was more interested in the history of fantasy football, the expanded media coverage, and how the NFL handles the “gambling aspect.”

I had no idea that USA Today was the first newspaper to include football stats from all the NFL teams on a weekly basis. That made it easier for fantasy football leagues to tally up winners and losers. Imagine the time it took to check several different newspapers to get stats on your weekly matchups. No internet at the time folks!

2015 fantasy players have it so easy.

Think the NFL RedZone would even exist without fantasy football. Hell no. It’s there to show fantasy players what they want to see, scoring on the field and in their digital leagues.

Fandom makes an excellent point about the NFL frowning on individual football players getting attention. Roger Goodell and the team owners want the League to be the focus always. That keeps the suits in charge of all the leverage. Can’t have the cogs in the NFL wheel being more important than the machine itself.

Fantasy football changes that and over time may shift the balance of power more to the NFL ballers. If you play fantasy football then you are going to know much more about certain skill position players on the field, instead of just following your favorite team. The NFL players union should use fantasy football as a weapon against he Shield when needed.

Some of the players in the film talked about how regular Joes talk to them about how the player helped them win matchups. The NFLers also had to deal with nuts on Twitter who get pissed when the player failed to score enough points.

Marshall Faulk said guys would tell him they needed three touchdowns from him, but still hoped his Rams lost that week.

Still, the benefits outweigh the negatives. An NFL player can build a bigger audience if he handles his fantasy interactions properly. That audience can mean more dollars in his pocket long term.

How does the NFL balance its stance on gambling with all the new daily fantasy sites that pay real money? That will be a balancing act that plays out over the next few years. Politicians are bound to get involved with the “loophole” that allows fantasy play for cash, since skill is involved more so than luck.

Along with the big money leagues, I enjoyed seeing the social aspect of the guys in the regular Joe’s leagues. Fantasy football gives people something to talk about. It’s competitive and that adds to the fun. But the icebreaker aspect is more important. Better to discuss a Tony Romo wrecking your matchup with a three pick fiasco than to talk about the weather, no?

Chris, the young man in Fandom with cancer, said fantasy football allowed him to take his mind off his illness. His brother Paul was wrapping up his college football career and fantasy football will be the only way he is involved in competitive sports going forward. Just like most guys.

By the way these two brothers got accused of collusion on a trade that eventually got vetoed by their league! Their league even had an official rulebook to stop such trades. Their commish takes his league seriously son.

Overall Fandom did a good job of covering all aspects of fantasy football. Hopefully the producers can come back soon to cover daily fantasy play, which warrants an entire documentary itself.

I have done a ton of reading on fantasy sports over the past year, but learned even more by watching Fandom. I had no idea that a 24 hour network covering fantasy sports even existed. I didn’t know Kendra Wilkinson was a fantasy player (still not sure I buy that one). And I may have to ask my insurance agent about “Fantasy Sports Insurance Coverage” in case my QB goes down in week two.

It’s amazing how fantasy football has expanded the universe around football.

Showing the weekly matchups didn’t interest me as much as showing the quirky personalities of some of the players involved. I can see how rookies could benefit from seeing that breakdown though. Newbies to fantasy play will also be helped by some of the experts from “Rotoexperts.com” giving out tips.

If you can make time between watching the RedZone, doing last minute lineup adjustments, and actually watching full NFL games, take 90 minutes to check out Fandom. You will come away with a better understanding of fantasy football and also get introduced to some interesting fantasy personalities.

Chris’s story is a moving one worth the watch.