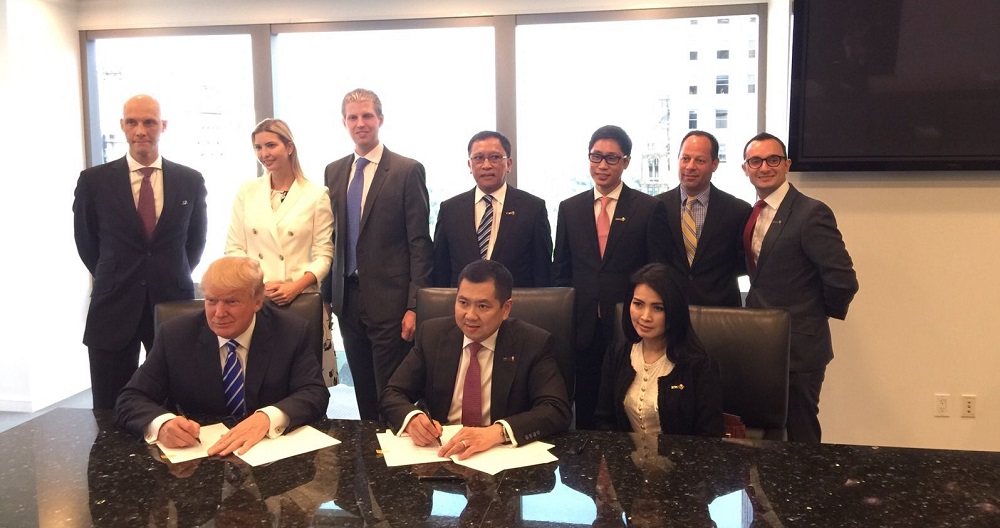 While Donald Trump has continually stated that he won’t allow his being President affect his business, his partner Hary Tanoesoedibjo is having no problem voicing what he wants to do.

Boasting more than a million followers on Twitter, three popular television channels and a newly minted political party, Hary Tanoesoedibjo says he has had enough success in business and now wants power of the political kind.

Tanoesoedibjo, better known as Tanoe, is like Trump a free-trade critic. He’s making his pitch to tens of millions of Indonesians left behind by a lopsided economy that favors a few major cities.

“I think under today’s environment, with the complexity, we need a businessman to run a country,” Tanoe said in an interview Saturday at his South Jakarta home, a small palace with a statue of a giant eagle looming over an immaculate driveway. “What I see is that (Trump) will give a lot of benefit to the American people, like his intention to bring back factories to the U.S.”

Aside from business, the two men share similar diagnoses of what ails their respective countries. Tanoe bemoans what he says is Indonesia’s fading competitiveness, lack of investment in manufacturing, widespread poverty and the risk it won’t provide enough good jobs for its burgeoning youth population.

Despite his presidential ambitions, Tanoe does not have any particular affection for Indonesia’s young democracy.

“Because those who really rule the country are those who sit with money and power. The supermajority of the people, they don’t understand anything. They just follow,” he said. “Maybe democracy is a good way for a developed country, in a country where the level of the playing field is the same.”

Tanoe, like Trump, exults in his business success, pointing to the 37,000 people working in his property and media conglomerate, MNC. Forbes estimates his net worth at $1.11 billion. He built his company from scratch, though he began with advantages not available to most Indonesians: His father was a businessman and Tanoe attended Canada’s Carleton University and the University of Ottawa.

His association with Trump began about three years ago when MNC was looking for an operator for sprawling “six-star” resorts, one to be built on the tourist island of Bali and the other near Jakarta.

In exchange for a cut of revenue, the Trump Organization will manage hotels, golf courses and country clubs that will cost about $700 million for MNC to build. The projects are to form the core of larger developments the company plans.

Tanoe said after the inauguration his business dealings with the Trump Organization will only be through Trump’s sons Don Jr. and Eric. He is one of the very few Indonesians with a personal relationship with Trump, and he said he is open to being a conduit between the incoming president and Indonesia.

“If I am asked to help facilitate anything for the benefit of the countries I am more than happy to help. That is my position. Basically, I don’t want to initiate, to do anything with the official relationship between Indonesia and the United States,” he said.

Such a role appears unlikely since Tanoe is not aligned with President Joko “Jokowi” Widodo. Indeed, in 2014, Tanoe was the vice-presidential running mate of Wiranto, a retired military chief and current government minister linked to human rights abuses in East Timor. That campaign faltered and Tanoe switched his support to another former general, Prabowo, who was eventually defeated by Jokowi, a maverick candidate. Prabowo, however, remains highly popular in the countryside.

Tanoe’s United Indonesia Party, founded in 2015, could play some role in the 2019 presidential election, but it’s far from clear whether he might be able to satisfy his political ambitions.

“Indonesia needs a leader which is strong, with integrity,” Tanoe said. “So if I know someone strong enough and with the ability to provide solutions to Indonesia, to bring Indonesia to become a developed nation, I would rather be in the position to support him or her. But if there is none I’m convinced of, then I may run myself.”

His ties to Trump could be both an asset and a liability in the world’s most populous Muslim nation and fourth-largest democracy, a country where military dictatorship was the norm until the ouster of President Suharto in 1998. Though Trump is notorious in Indonesia for proposing a ban on Muslim immigration, there is also a reservoir of admiration for the U.S. superpower.

A greater obstacle may be that Tanoe is an ethnic Chinese and Christian. Indonesia’s historical antipathy to its Chinese minority has intensified recently, and hard-line Muslim groups, supported by a marriage of convenience with mainstream political opponents of Jokowi, have seized the political initiative.

Protests against Jakarta’s ethnic Chinese and Christian governor, a Jokowi ally, drew hundreds of thousands to the capital’s streets late last year, demanding his arrest for alleged blasphemy. Gov. Basuki “Ahok” Tjahaja Purnama, who is campaigning for re-election next month, is being tried on charges of insulting Islam and desecrating the Quran.

Tanoe blames a pattern of weak law enforcement responses to provocations by hard-liners for the recent success of their movement, which he doesn’t believe represents mainstream opinion.

“The majority of the Indonesian people are still moderate; that’s for sure,” he said.