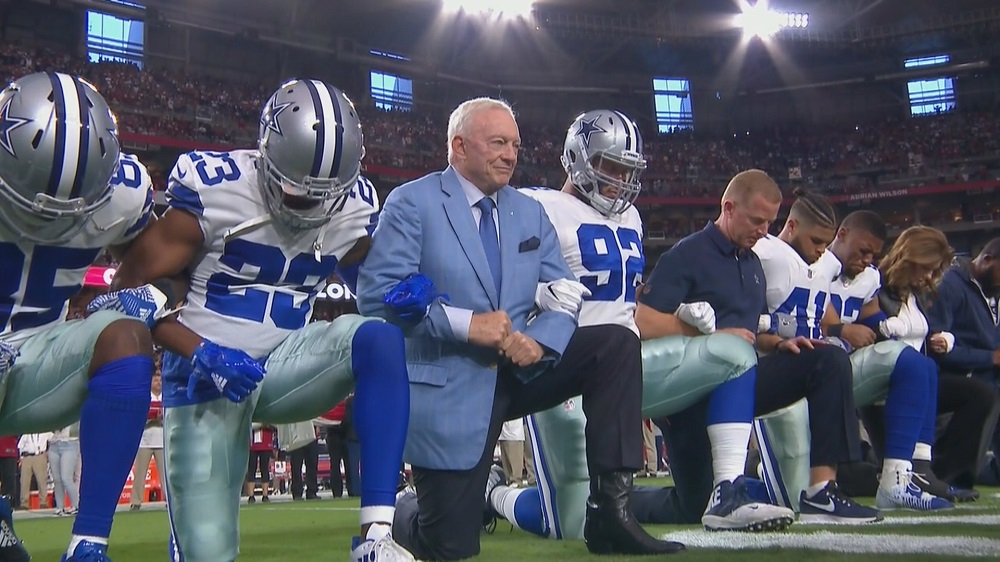 President Donald Trump just gave us all exactly what the United States needed: more politics in football. Perfect timing, too! Just the other day I was telling my friend, “Man, you know what the major problem with the NFL is? Too much football, not enough politics.”

I’m active in politics. I watch the news nearly every night—except Sunday. Sunday is football day. I don’t want any news on Sundays, but now half of my Sunday has been filled with discussions about Trump and counts of kneeling players.

Things started off Friday when Trump was making a speech in Alabama in support of Senate candidate Luther Strange. Trump was talking about respect for the U.S. and our flag, and he shifted to the topic of Colin Kaepernick and NFL players taking a knee during the National Anthem.

“Wouldn’t you love to see one of these NFL owners, when somebody disrespects our flag, to say, ‘Get that son of a bitch off the field right now.’”

Ahh, great. As soon as I heard it, I knew he had ruined my Sunday. Probably my next few Sundays.

Teams did a variety of things this week in protest. The Seattle Seahawks, Pittsburgh Steelers, and Tennessee Titans decided to stay in the locker room altogether.

Now, that is disrespectful. So was LeSean McCoy stretching during the playing of the anthem. Taking a knee to start a discussion and draw attention towards an important cause is acceptable. Completely ignoring the anthem seems like a slap in the face. Just my opinion.

Anyways, many other players took a seat or a knee during the song, including what seemed like half the Denver Broncos team. So many Broncos were down, in fact, that people were asking the players left standing why they didn’t take a knee. Defensive lineman Derek Wolfe said, in effect, that he loves this country and if you don’t go try living somewhere else.

“I stand because I respect the men who died in real battles, so I have the freedom to battle on the field,” said Wolfe in a statement. “Paying tribute to the men and women who have given their lives for our freedom is why I stand. But everyone these days like to find a reason to protest and that’s their right. It’s America, and you are free to speak your mind. I just feel it’s disrespectful to the ones who sacrificed their lives and it’s the wrong platform. But, like I said, to each their own, it’s AMERICA! The greatest country in the world and if you don’t think we are the greatest country in the world and you reside here, then why do you stay? A lot worse places in the world to call home. Proud to be an American.”

Wolfe, of course, is protected by the same first amendment that his kneeling teammates are, and clearly, his view on the matter is drastically different than the majority of his teammates.

Here’s my unpopular opinion on the matter: I don’t think that politics has a place in football, and I don’t think that NFL players should use their position to promulgate their political beliefs and agendas. But that goes for any job. If I hire an accountant, I want my accountant to do my taxes, not tell me about how the government needs to spend more money on education.

Now, that being said, I have absolutely no problem with NFL players talking about politics on Twitter or hosting special events to discuss issues in the community. That’s great. I think that they should use their celebrity for the greater good of their communities and to promote issues important to them. But when they’re on the clock, I think they should stick to business.

Then again, public opinion is a little different, and for the most part, NFL owners seem willing to let players do what they want to keep them happy. As long as they stay out of trouble, you won’t see owners telling their players how to act on the field, that’s what they pay the coaches to do.