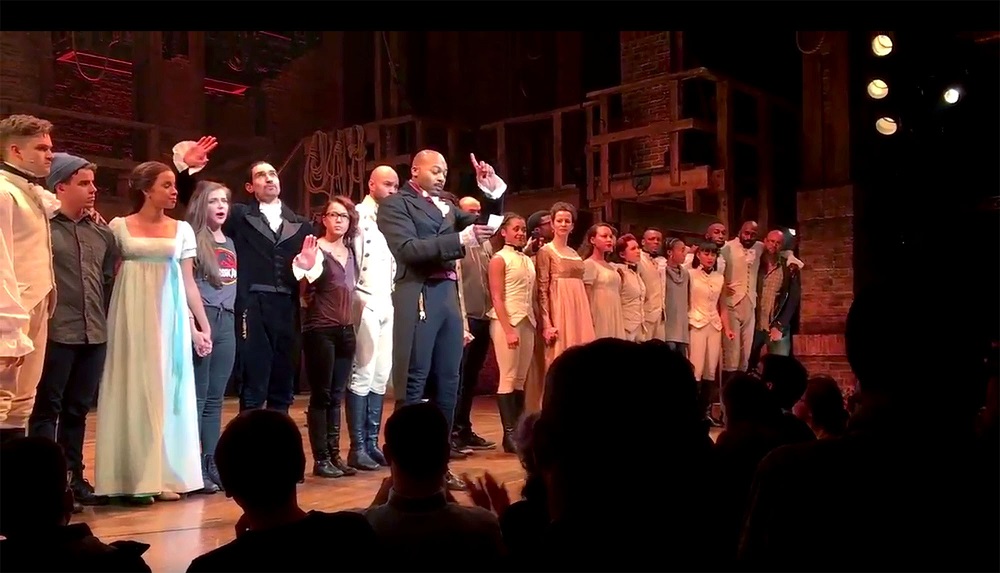 For someone who wasn’t at the show, Donald Trump has gotten very hot under the collar with Hamilton giving Vice-president elect Mike Pence a message. Interestingly enough, Pence praised the show and said that their message didn’t offend him or even bother him.

Trump took to Twitter in an outburst at the hit Broadway show and keeps showing the world how he’ll be acting out sometimes when he feels he’s been slighted. Trump already complained on Twitter that this week’s Saturday Night Live felt one-sided to him, but when he hosted the show last season, he ‘loved’ it.

Trump has stated already about wishing to make changes with the media (and in effect, free speech), and these Twitter outbursts only make it appear that he’s not too happy when others exercise their First Amendment right, but he’s free to say anything, no matter how inappropriate, and it’s fine. History has shown us many leaders who felt this way.

President-elect Donald Trump, in the midst of choosing his Cabinet, took time out Sunday for a second day to criticize the cast of the Broadway musical “Hamilton” and demand an apology for a message an actor delivered from the stage to Trump’s running mate about the need for diversity in America. But Vice President-elect Mike Pence said he wasn’t offended by the message. 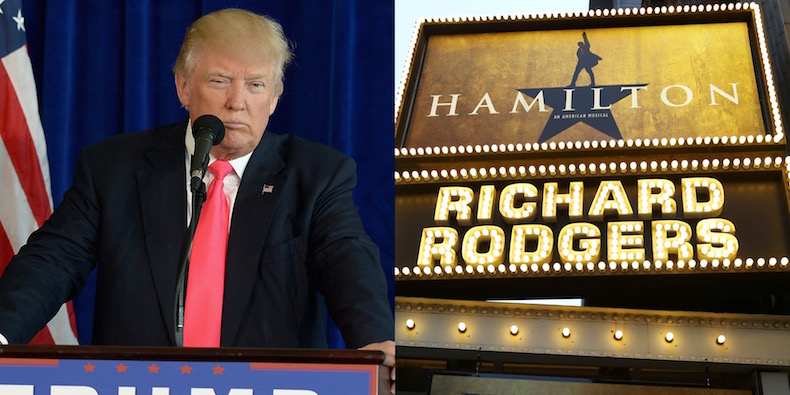 Pence said on “Fox News Sunday” that he heard the boos and cheers when he walked into the Richard Rodgers Theatre with his nephew and daughter on Friday night to see the show. He said he told his daughter: “That’s what freedom sounds like.”

Trump had a different take on the message from cast member Brandon Victor Dixon, who had expressed his concerns in a prepared speech after the curtain call about the incoming Republican administration.

“We, sir, we are the diverse America who are alarmed and anxious that your new administration will not protect us, our planet, our children, our parents, or defend us and uphold our inalienable rights,” said Dixon, who plays Aaron Burr, the nation’s third vice president, as his fellow actors joined hands. “We truly hope that this show has inspired you to uphold our American values and to work on behalf of all of us.”

Trump tweeted Saturday that Pence had been “harassed” by the cast. He called them “very rude” and demanded they apologize. On Sunday, while awaiting a second day of meetings as he works to vet potential candidates for his administration, he repeated his order for an apology – and added a dig at the critically acclaimed show, which is sold out until September.

“The cast and producers of Hamilton, which I hear is highly overrated, should immediately apologize to Mike Pence for their terrible behavior,” he tweeted.

But Pence told Fox News that “Hamilton” was an “incredible production” involving a very talented cast. On whether he thought an apology was necessary, he said: “I’ll leave it to others whether that was the appropriate venue to say it.”

When prompted by Trump for an apology, Dixon responded on Twitter that “conversation is not harassment sir” and added that he appreciated Pence stopping to listen.

Reaction to the debacle was mixed, with some calling Dixon’s speech “disrespectful” and threatening to boycott the show and others saying it was an important message that needed to be delivered.

The musical is by Lin-Manuel Miranda, who wrote the story, music and lyrics. It stresses the orphan, immigrant roots of first U.S. Treasury Secretary Alexander Hamilton and has a terrifically varied score, ranging from pop ballads to gospel to sexy R&B. It has been cheered for reclaiming the nation’s founding story with a multicultural cast.

Miranda, in a tweet, said he was “proud” of Dixon and the “Hamilton” cast “for leading with love,” before reminding people that everyone is welcome at the theater.

Miranda had been a big booster for the failed presidential campaign of Trump’s opponent, Democrat Hillary Clinton, including performing at an all-star fundraiser for her last month. The cast also put on a special “Hamilton” show at a Clinton fundraiser last summer.

“Hamilton” wasn’t the only show that Trump took issue with over the weekend. He tweeted that “Saturday Night Live” is a “totally one-sided, biased show – nothing funny at all.” He was portrayed in the cold open on Saturday’s show as overwhelmed with his new duties as president – so much so that when told he would soon have to reveal his plans for defeating the Islamic State group, he had to type on his computer: “Google, what is ISIS?”