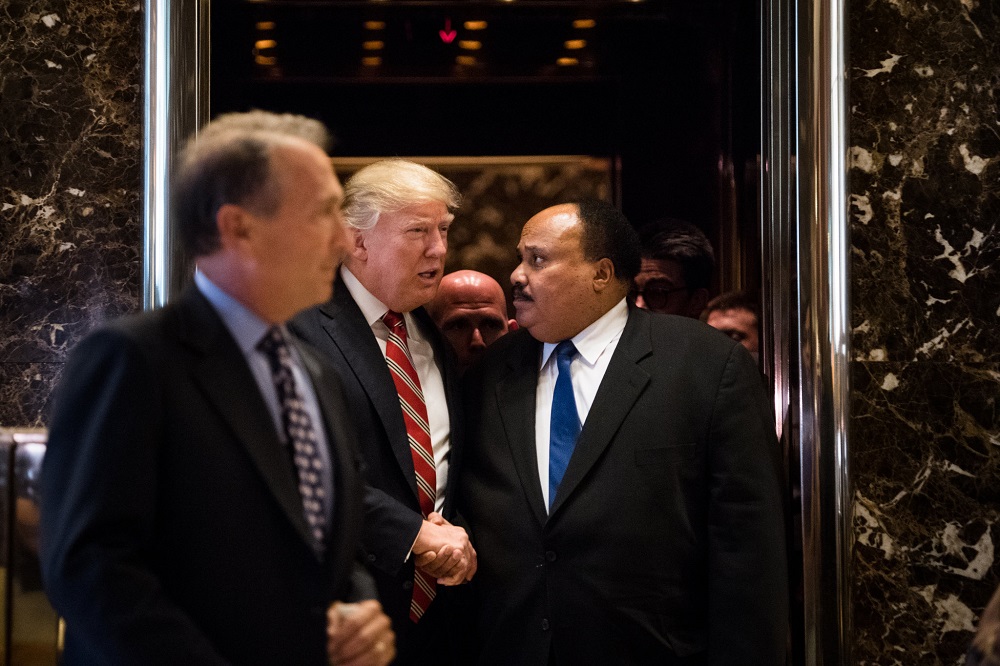 Days before taking office, President-elect Donald Trump attempted to navigate the fallout of his flap with a civil rights leader and colleague of Dr. Martin Luther King Jr. while also losing a member of his incoming administration to accusations of plagiarism.

Trump on Monday met with one of King’s sons on the holiday marking the life of the slain American icon just days after the president-elect attacked Rep. John Lewis on Twitter. Lewis and the elder King were among the Big Six leaders of the civil rights movement of the 1960s.

Trump accused Lewis, D-Ga., for being “all talk” after Lewis questioned the legitimacy of Trump’s election. The president-elect also advised the veteran congressman to pay more attention to his “crime ridden” Atlanta-area district. Trump’s comments drew widespread criticism and have done little to reassure those uneasy about the transition from the nation’s first black president to a president-elect still struggling to connect with most nonwhite voters.

Martin Luther King III downplayed the slight, saying that “in the heat of emotion a lot of things get said on both sides.” King, who said he pressed Trump on the need for voting reform to increase participation, deemed the meeting “constructive.” King said that while he disagreed with the president-elect’s comments, he believed “at some point in this nation we’ve got to move forward.”

“He said that he is going to represent all Americans. He said that over and over again,” King told reporters in the lobby of Trump Tower after the nearly hourlong meeting. “I believe that’s his intent, but I think we also have to consistently engage with pressure, public pressure. It doesn’t happen automatically.”

Trump, who struggled for support from minority voters on Election Day, briefly joined King in the lobby but ignored reporters’ shouted questions about his comments about Lewis.

Lewis had suggested that Trump’s November victory was delegitimized due to Russian interference and said he would boycott Friday’s Inauguration. More than two dozen Democratic members of Congress have said they will sit out the Trump ceremony. Among them is Tennessee Rep. Steve Cohen, who said Monday that “this president ‘semi-elect’ does not deserve to be president of the United States. He has not exhibited the characteristics or the values that we hold dear.”

The Martin Luther King holiday is meant to honor community service and volunteerism, and many Americans, including President Barack Obama, spend part of the day doing a service project of some kind. Trump, who canceled a planned trip to Washington, spent the day inside the Manhattan skyscraper that bears his name.

Meanwhile, conservative media commentator Monica Crowley will not be joining the Trump administration following accusations of plagiarism, according to a transition official.

Crowley, a frequent on-air presence at Fox News Channel, had been slated to join Trump’s National Security Council as a director of strategic communications. On Monday, she withdrew her name from consideration after CNN reported last week that several passages in a 2012 book Crowley wrote were plagiarized. Publisher HarperCollins then pulled the book.

Crowley’s retreat was first reported by The Washington Times. The transition official confirmed the decision on the condition of anonymity because the official was not authorized to speak publicly about the matter.

Trump has continued to lash out at his critics in the intelligence community and questioned whether the CIA director himself was “the leaker of fake news” in a Sunday night tweet.

The extraordinary criticism from the incoming president came hours after CIA chief John Brennan charged that Trump lacks a full understanding of the threat Moscow poses to the United States, delivering a public lecture to the president-elect that further highlighted the bitter state of Trump’s relations with American intelligence agencies.

Trump shot back in a Twitter post Sunday, saying: “Oh really, couldn’t do much worse – just look at Syria (red line), Crimea, Ukraine and the buildup of Russian nukes. Not good! Was this the leaker of Fake News?”

Additionally, European Union nations bracing for Trump’s ascension showed defiance Monday in the face of the president-elect’s stinging comments on everything from NATO and German cars to the crumbling of the EU itself.

Trump also said Britain’s decision to leave the 28-nation European Union would “end up being a great thing,” and he predicted that other countries would also leave.

At a meeting of EU ministers, French Foreign Minister Jean-Marc Ayrault said the best response to such comments was simple – “it is the unity of the Europeans.”

In Berlin, German Chancellor Angela Merkel insisted: “We Europeans have our fate in our own hands.”