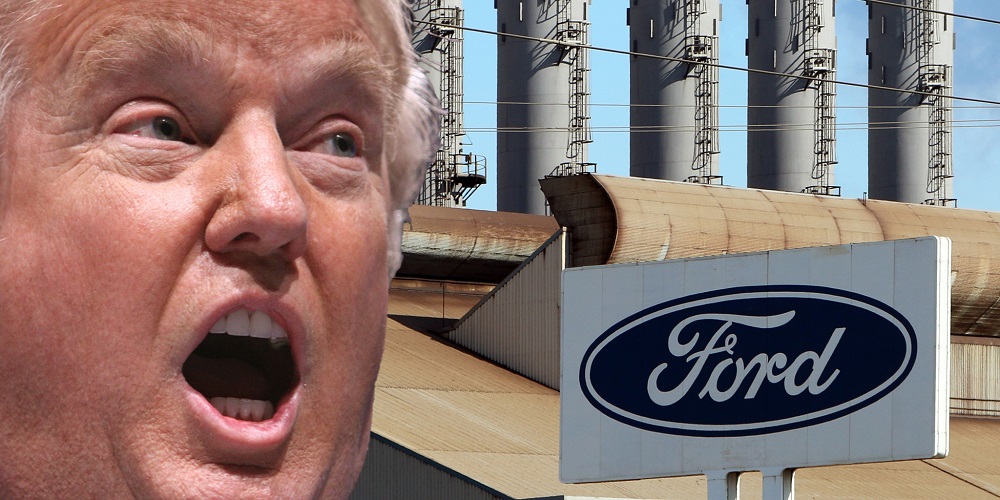 Through the decades many business people had stories about Donald Trump taking credit for ideas that were far from his, and on Thursday, the President-elect proved their point by claiming to have saved American jobs by saving a plant from closing.

The President of Ford had to correct Trump as that was never the case to begin with.

President-elect Donald Trump claimed Thursday that he convinced the chairman of Ford Motor Co. not to move an assembly plant from Kentucky to Mexico. But Ford never intended to move the plant, just production of one of the vehicles it makes.

Trump said in a tweet that Bill Ford, the company’s executive chairman, telephoned him with the news that a “Lincoln plant” would stay in Louisville. Instead, Ford decided to keep production of the Lincoln MKC small SUV at the Louisville Assembly Plant. Ford had previously said it would move production of the MKC out of the plant in order to build more Ford Escapes there.

A factory in Cuautitlan, Mexico, was likely to get the MKC. Under a contract negotiated last year with the United Auto Workers, Ford agreed to invest $700 million in the Louisville plant in return for moving production of the MKC. Because Escape production would increase, no Louisville jobs would be lost. 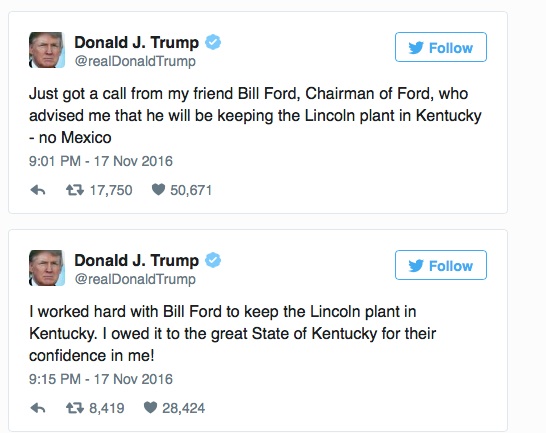 It’s possible the decision to keep the MKC in Kentucky was made before the election, because Escape sales have been falling since July and additional production capacity in Louisville may not be needed.

On Friday, Ford would say only that the MKC decision was “recent,” but spokeswoman Christin Baker wouldn’t say exactly when it was made or whether Trump directly influenced it.

The MKC and Escape are essentially the same vehicle and are now built by the same workers on the same assembly line. But while Ford has sold over 258,000 Escapes so far this year, it’s only sold about 21,000 MKCs. So, moving the MKC would have had little impact on the factory even if Escape production was not increased.

Still, Trump claimed credit for saving a factory from moving to Mexico. “I worked hard with Bill Ford to keep the Lincoln plant in Kentucky. I owed it to the great State of Kentucky for their confidence in me!” Trump said in one of two tweets on the subject. His initial tweet said: “Just got a call from my friend Bill Ford, Chairman of Ford, who advised me that he will be keeping the Lincoln plant in Kentucky – no Mexico.”

Ford Motor Co. and Trump have engaged in a yearlong feud over the automaker’s plans to move production south of the border. The company plans to shift small-car production from suburban Detroit to Mexico to improve the profitability of the lower-priced cars. CEO Mark Fields said Tuesday that the presidential election didn’t change the company’s plan.

Trump wants to renegotiate the North American Free Trade Agreement and has called for a 35 percent tariff on goods shipped from Mexico in an effort to preserve U.S. manufacturing jobs.

Ford plans to move production of the Focus and C-Max small cars to Mexico from a plant in Wayne, Michigan. But jobs at the Wayne plant would be preserved because it’s getting a new SUV and small pickup truck.

“We are encouraged that President-elect Trump and the new Congress will pursue policies that will improve U.S. competitiveness and make it possible to keep production of this vehicle here in the United States,” Baker said in an email.