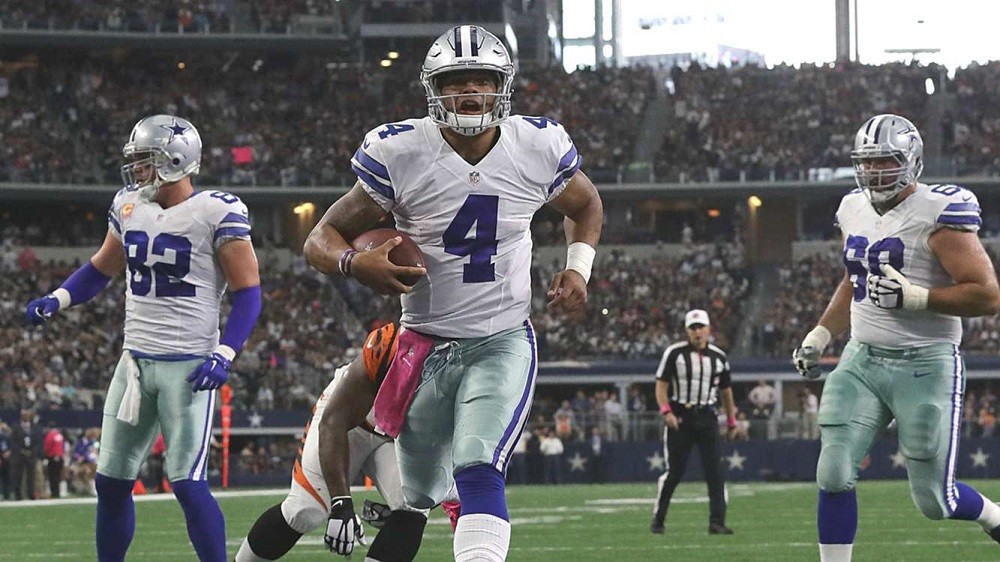 Dallas Cowboys rookie quarterback Dak Prescott found himself thrown into an awkward situation: with Tony Romo broken yet again, Prescott was forced to step up and start for one of the most scrutinized teams in professional sports. Every year for the Cowboys seems to be Super Bowl or bust.

To say Prescott has not only survived but thrived would be the understatement of the season. After dropping Week One to the New York Giants, Prescott has quarterbacked the Cowboys to four straight victories, including a demolition of the Cincinnati Bengals Sunday where the Cowboys, at one point, held a 28 point lead.

In the process, Prescott accumulated 1,239 passing yards and four touchdowns completing 69 percent of his passes. Prescott also established a new NFL rookie record for passes to start a career without an interception.

So how, after all of that, could the Cowboys possibly consider starting Tony Romo upon his return from injury? Hell, I think they should cut him after this season should Prescott continue to improve. Alas, Jerry World is a mysterious place. He would rather play both of them simultaneously.

“Tony is our No. 1 quarterback,” said Cowboys owner Jerry Jones after the game. “We’re going to have the luxury of being able to, I think, see them both. Now I don’t want to take anything—presume that Dak is going to be necessarily healthy. I don’t want to presume anything like that, but I welcome the opportunity of having Dak playing at this level and Tony back in excellent health. It’s going to be really special for the Cowboys.”

The rookie did a great job of staying on the game when pressed about the issue.

“We’ve done a great job of putting the past behind us if it is a win or a loss and just focusing on what’s in front of us,” said Prescott.

And why doesn’t Jerry want to presume Dak stays healthy? Does he have a conspiracy out to injury the rookie to help reunited the fan base around the fragile Romo?

Don’t shake your head at me; it’s 2016. We’ve, unfortunately, seen much worse this year.