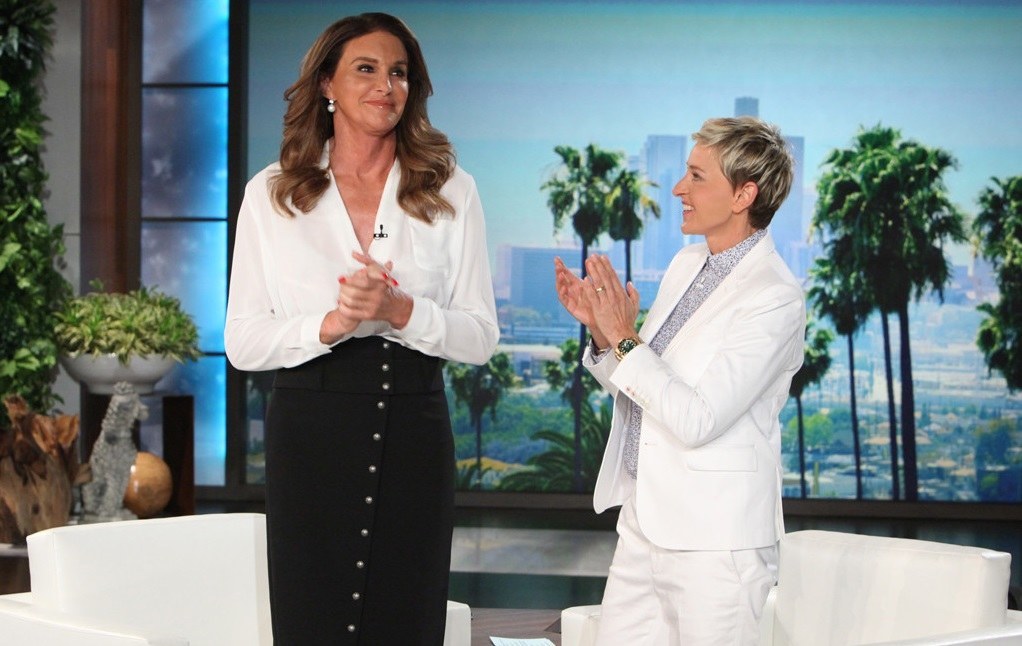 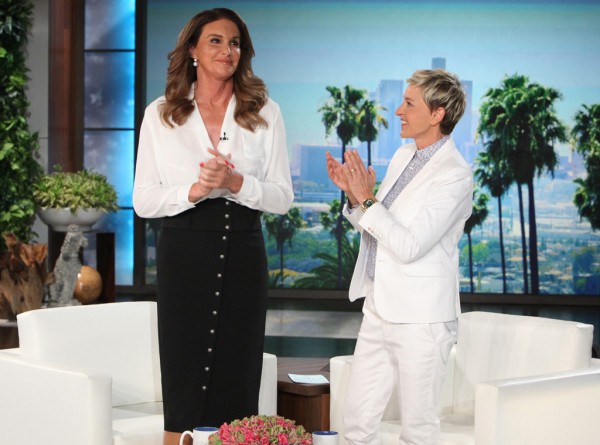 With her 13th season of her show kicking off on Tuesday, Ellen DeGeneres made sure to bring in some big names in Hollywood to help her start the show. Therefore on Tuesday, Caitlyn Jenner will be Ellen’s first guest of the season.

The 65-year-old former Olympian is seen in the promos wearing a black knee-length skirt, white blouse and bright red nails. In her interview, she opens up to Ellen about her family, marriage and her pursuit of a new normal.

In the interview, Ellen asks Caitlyn about her identification as a conservative Republican in the past. Ellen says, “It’s not a bad thing, the only thing is, a lot of republicans…would vote against all the issues that you as a woman and you as a transperson would want to support.”

In which Caitlyn replies, “I agree with that in some cases.”

Caitlyn goes on to explain her views on same-sex marriages saying, “Gay marriage. I have to admit that I remember 15 years ago, 20 years ago whenever it was the whole gay marriage issue came up at first, I was not for it. I mean I thought I am a traditionalist I mean I’m older than most people in the audience. I mean I like tradition and it’s always been between a man and a woman and I’m thinking I don’t quite get it. But as time goes on, like a lot of people on this issue I’ve really changed thinking here, to I don’t ever want to stand in front of anybody’s happiness. That’s not my job. Ok. If that word marriage is really, really that important to you I can go with it.”

After sensing hesitance Ellen replies, “it’s funny because you’re still a little not on board with it.”

In response, Caitlyn reassures her saying, “No, I’m on board. It’s going to be pretty much the law of the land. So I still like yea, I’m ok with it. I don’t want to stand in front of somebodies happiness.”

You can catch the full interview when Ellen premieres on September 8th.

According to her new interview with InStyle UK, model and actress Emily Ratajkowski is not too proud of her role in the infamous music video for Robin Thicke’s ‘Blurred Lines.’

The song has stirred up plenty of controversy over its sexually explicit lyrics. It continued to draw up criticism when it released a racy music video that showed Emily, along with other models, dancing around in next to nothing.

Emily reveals in her interview, “I wasn’t into the idea [of the music video] at all at first. I think I came off as a bit annoyed in the video.”

She continues to explain saying, “[the video], it’s the bane of my existence. When anybody comes up to me about ‘Blurred Lines,’ I’m like. ‘Are we seriously talking about a video from three years ago?”

Arguably, Emily’s role in the video was a big catapult for her career in the industry. Prior to dancing around alongside Robin Thicke, Emily had appeared in a lesser-known movie called A Year in the Day and had a reoccurring spot on ICarly. However, after the video Emily snagged roles in hit movies such as Gone Girl and Entourage, as well as was a co-star to Zac Efron in We Are Your Friends.

In the unrated version (seen below) of the video Emily is seen nude, therefore when asked about the subject Emily told Instyle UK, “It’s weird to me that the reaction to a woman’s naked body is so controversial in our culture. My mom taught me to never apologize for my sexuality. My dad never made me feel embarrassed. I don’t think I’ve ever had an awareness of my own body as being super-sexual. It was always just my body.”
Blurred Lines Unrated Music Video