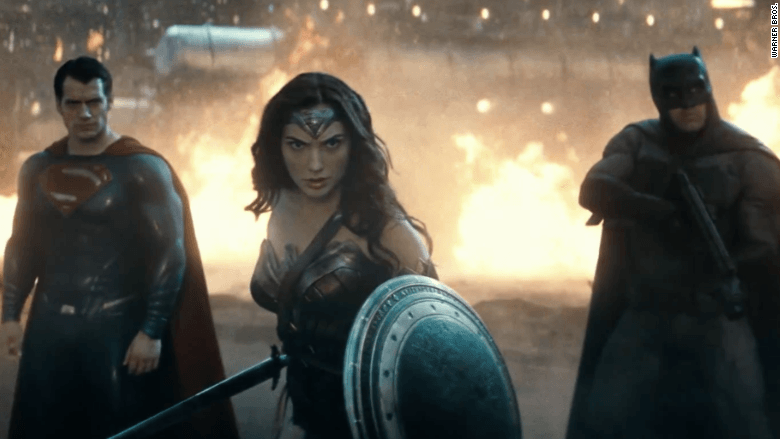 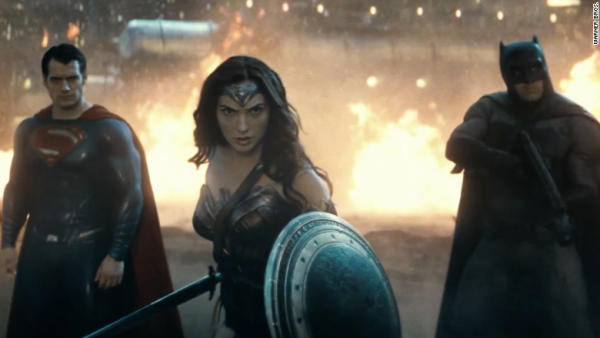 Yet another superhero movie debuted its trailer on Jimmy Kimmel Live! This week actor Ben Affleck stopped by Kimmel’s show to premiere the newest official trailer for his upcoming movie, Batman v. Superman: Dawn of Justice.

Jimmy enlisted his security guard sidekick Guillermo to shine the bat signal into the air over Hollywood Boulevard, and sure enough Ben Affleck (aka Batman) appeared amongst the studio audience. Jimmy and Ben played up a funny little skit before introducing the action-packed trailer. Much of the Internet noticed that Ben looked a lot more put together than he has in the past while (as he announced his divorce from ex-wife Jennifer Garner over the summer). It looks like he is beginning to put his game face on, as he enters the final stretch of promotion before the film is released in theatres.

Batman v. Superman marks Ben’s first attempt at portraying the iconic hero. When the movie is released in 2016, it will be four years since the last Batman movie hit theatres (Dark Night Rises). The past few movies have starred actor Christian Bale, therefore many fans have been critical of the casting of Affleck. Nonetheless, Affleck has proven himself a capable actor in recent projects such as Argo and Gone Girl, so hopefully he will be able to win the diehard fans over as he embodies Bruce Wayne.

The premise of Batman v Superman: Dawn of Justice is that the people of the world have mixed feelings towards Superman. After the events that occurred in the Man of Steel, some people are singing his praises and labeling him a hero, while others are hesitant and perceive him as an incredibly dangerous threat. Batman, who witnessed Superman’s climatic battle with General Zod and the destruction associated with it, is part of that latter group and doesn’t trust Superman. Therefore, Batman decides to do whatever it takes to stop Superman from doing any more damage. Unfortunately, this leads to trouble when an even greater threat arises.

Once again, actor Henry Cavill will be reprising his role as Clark Kent, aka Superman. In the upcoming film, Superman will be continuing to try and find his place on Earth, while dealing with the consequences of his detrimental actions in Man of Steel (where he wound up destroying a good chunk of Metropolis and its citizens).

Meanwhile, Batman is expected to return to the screen with a bit of a different attitude than previous films. Director Zack Snyder recently revealed that Ben would be portraying the hero as, “tired and weary and seasoned.” In addition, the film will dive into how Batman was deeply affected by the destruction of Metropolis and subsequently, his strong desire to seek revenge.

The trailer begins with showing Bruce Wayne entering a prestigious event, where journalist Clark Kent interviews him for The Daily Planet. From the get-go, you can feel the tension between the two characters as they exchange criticism about each other’s home city heroes (i.e. each other).

Soon after, we are introduced to Jesse Eisenberg’s version of sly super villain, Lex Luthor. “Bruce Wayne meets Clark Kent,” he exclaims as he awkwardly positions himself into their conversation. Jesse’s quirky portrayal definitely brings a new twist to the character.

Afterwards, the trailer goes heavily into visual effects as we see Batman and Superman using all of their powers to try and defeat one another. The teaser ends off with a glimpse of the big threat that will ultimately cause Batman and Superman (and Wonder Woman, play4ed by Gal Gadot) to work together, Doomsday.

Unfortunately for Warner Brothers, the trailer did not garner as much hype as the previous teaser. In addition, it also did not fair as well as its competitor, Marvel’s Captain America: Civil War. While some speculate that this is simply because it’s the third trailer that they have released for the film, others claim that the trailer was disappointing.

While the fact that Superman and Batman hash things over at some point in the film isn’t all too surprising, it definitely should not have been revealed in the trailer. Since the previous marketing was focused on the big battle between the two forces (Batman v. Superman), it doesn’t make sense for them to spoil it all. Many fans took to Twitter to advise others to skip this last trailer, as it could potentially detract from their viewing experience when the film is actually released.

PSA: Don't watch the new #BatmanvSuperman trailer. It gives away too much stuff that would have been great to discover in the theater.

Overall, Batman v. Superman is undoubtedly going to be a must-see action movie, but it looks like the studios went a little overboard trying to sustain the hype surrounding it. In doing so, they upset some of the people who matter most when it comes to making money at the box office. Ultimately, I suggest you skip this last trailer but go see the movie!