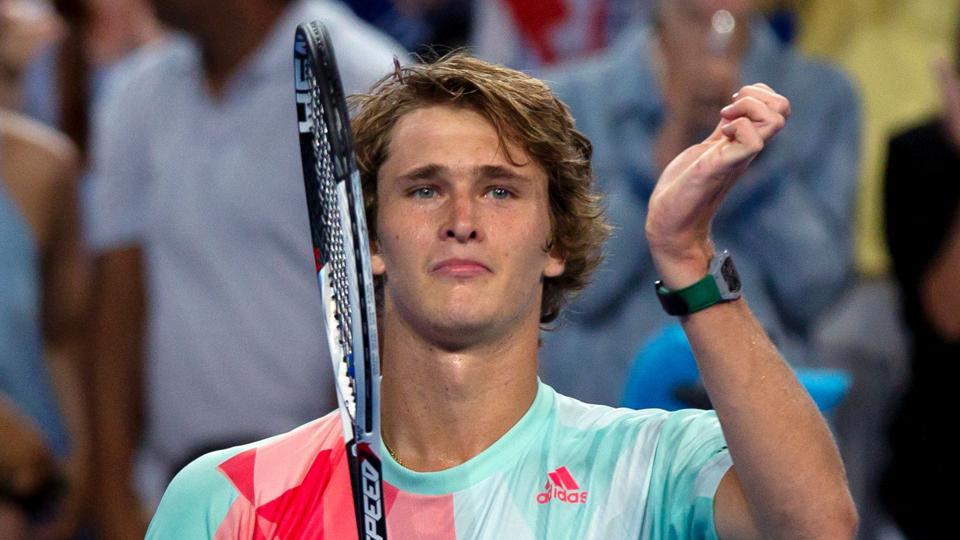 At 20-years old, Alexander Zverev has come under the microscope with people wondering whether he will just be another tennis prodigy whose seeming endless future winds up deflating into mediocrity or will he prove to be what Rafael Nadal predicted as “A clear possible future No. 1?”

The past champions whose names line the grandstands at the Citi Open include Andre Agassi (five times), Jimmy Connors, Stefan Edberg and Ivan Lendl.

On Sunday, Alexander Zverev showed he may one day belong among such exalted company.

The 20-year-old rising star from Germany picked up early breaks in each set and was never challenged on his serve in a 6-4, 6-4 victory over South African veteran Kevin Anderson on Sunday for his fourth ATP title of the year. That matches Rafael Nadal‘s victory total this season and trails only Roger Federer‘s five.

The eighth-ranked Zverev dropped his opening set in Washington and had to survive a third-set tiebreaker to avoid an upset in the first round. He didn’t lose a set after that opening match against Jordan Thompson and grew stronger as the tournament went on, having little trouble with the hot and humid conditions or the late nights brought on by rain delays.

“I feel like the longer the tournament gets, the better I start to play,” Zverev said.

The title was Zverev’s first of his career on an outdoor hard court and gives him momentum heading into the U.S. Open, which starts Aug. 28.

Anderson, 31, came in with a tournament-best 62 aces, but Zverev got enough first serves back to give himself ample break opportunities. Zverev broke Anderson early in each set and never faced a break point on his own serve.

He played with little fear, ripping hard, flat cross-court backhands that caught Anderson off-balance. Serving at 4-3, 0-15 in the first set, Zverev hit a 127-mph second serve for a winner, and then followed it with a 121-mph first-serve ace.

Zverev’s previous titles this year came at a Masters event on clay in Rome, along with wins on clay in Munich and on indoor hard courts in Montpellier, France.

“I wouldn’t be surprised if he wins a few Grand Slams, at any rate,” Anderson said. “That’s definitely what the path looks like right now.”

Seeking his fourth career title and first since 2015, Anderson looked shaky early, double-faulting twice and surviving two break points in the opening game. Serving at 15-40 at 1-1 in the first set, Anderson hit a short ball deep to Zverev’s backhand. Zverev got it back, and Anderson hit an overhead into the net.

In the second set, an error by Anderson at 30-40 in the first game gave Zverev another break, and the German was hardly challenged from there.

“I was pretty happy with the way I played,” Anderson said. “Didn’t even get a break point today. He played well with having that lead in those two sets.”

Zverev’s father, Alexander Sr., is a former tour pro from Russia who now coaches Alexander and his older brother, Mischa, who currently is ranked 26th. The family moved to Germany in 1991.

“It’s quite amazing what we’ve achieved,” Zverev said to his father during his victory speech. “You might be the best coach in the history of tennis.”

Ekaterina Makarova of Russia rallied to beat Julia Goerges of Germany 3-6, 7-6 (2), 6-0 to take the women’s title in a draw that lost much of its star power when second-ranked Simona Halep retired because she felt ill in the Washington summer heat.

Makarova and Halep were tied at a set apiece when Halep retired in their quarterfinal match. The 58th-ranked Makarova went on to beat Oceane Dodin in the semifinals.

On Sunday, Goerges won the first set easily and was down a break in the second before she won three straight games, two of them on Makarova’s serve, to give herself an opportunity to serve for the match. But she failed to close it out and, after an error-filled tiebreak, didn’t win another game, frequently scowling and gesturing toward the grandstand.

It was the third career title for Makarova, 29, and her first since 2014. Goerges was seeking her first title in six years.

NOTES: Top-seeded Henri Kontinen of Finland and John Peers of Australia won the men’s doubles title 7-6 (5), 6-4 over second-seeded Lukasz Kubot of Poland and Marcelo Melo of Brazil. … NBA rookie of the year Malcolm Brogdon of the Milwaukee Bucks, a Virginia graduate, attended Sunday’s finals. “I’ve been training in D.C. all summer,” Brogdon said. “It’s like home to me.”