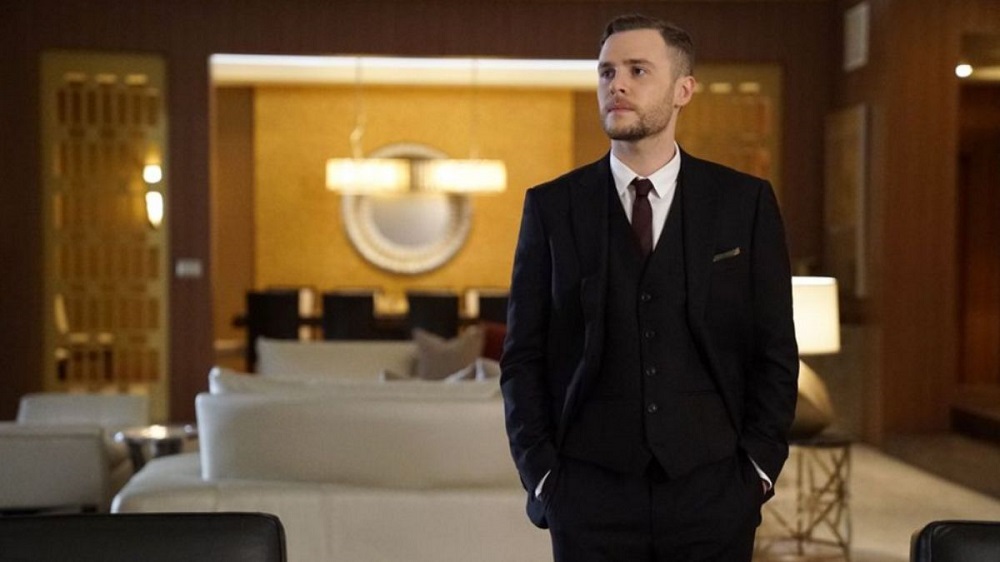 Mallory Jansen has a new fan. She’s so gorgeous as Madame Hydra in the latest episode of Agents of SHIELD, What If. This is her third role in the series which covers three story arcs of Season 4. Ms. Jansen was first introduced as the Life-Model Decoy AIDA in the Ghost Rider arc and later as the person AIDA was modeled after Agnes Kitsworth in one episode of the LMD arc and now as the gorgeous Madame Hydra in the Framework/Agents of HYDRA arc. Hopefully, in this new fascinating Matrix-like take on the world, the show’s ratings would spike and keep the show alive and proceed with syndication. Their comic-book like take on the story arcs keeps the show fresh and removes the drag factor that often makes TV series suffer like in the Netflix series. The Netflix series are quite good, and the best we can say about Iron Fist is that it’s nice, but they seem to have more episodes than necessary.

Last we saw in Agents of SHIELD, everyone in the team except for Daisy and Simmons were captured by AIDA and Radcliffe and were put into their Matrix-like Framework. Even Radcliffe himself fell victim to a now malicious AIDA (who seems to have broken the three laws of AI) and had his consciousness exiled in his own creation with his body let out to ‘dry.’ With the SHIELD base crawling with LMDs of their former teammates, Daisy and Jemma enter the framework themselves to rescue their teammates. Daisy, however, wakes up to an unfamiliar room with Ward as her boyfriend (SkyWard fans rejoice) while Jemma’s name, in a cliffhanger, is shown on a tombstone. Fitz looks rich ushering an unidentified girlfriend out of a car, Mack is living at home with his dead daughter, Coulson is teaching an anti-Inhuman awareness class, and May looks happy in a now rebuilt Triskellion with a HYDRA logo. The show’s fans are locked in anticipation of what comes next and hopefully; the general public would bite in and just catch up on Netflix.

SPOILER Alert as we recap this latest episode of the series. Just mosey on to the last paragraph if you don’t want to get spoiled.

Thank you for staying with us as we knew you’d like to know what we think here. The show begins with Daisy waking up to the scenario previously described. She’s not affected by the new reality as she anticipated that Lincoln was the guy she slept with which turns out to be Ward. She instinctively held out her hand to use her powers but surprise, it didn’t work. Another surprise is that Ward called her Skye. Apparently, this version of Ward is the guy from Season One. Quick on her feet, Daisy adapts her dialogue to suit the scenario. Ward himself doesn’t suspect anything and makes fun of the hand thing. He later gives Daisy, or Skye her ID, and she looks at it with dread because instead of SHIELD, the logo is HYDRA. The Agents of SHIELD logo then changes into Agents of HYDRA introducing us to the title of Season 4’s third arc. 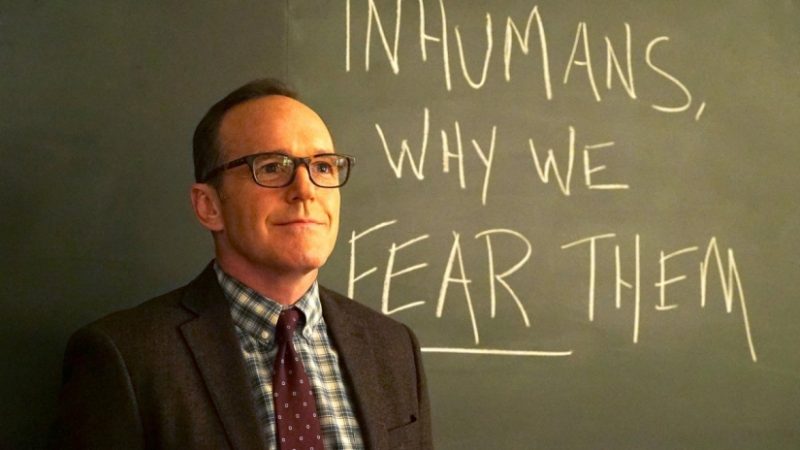 Later on their way to work, it’s shown that Inhumans exist despite Daisy not having her powers and as shown in the previous episode, persecuted. Skye is later surprised to see the Triskellion intact despite it being destroyed in Captain America: Civil War. At her station, Skye looks up Lincoln’s status and later is distressed to find out that Jemma’s dead. She later meets May who is no nonsense and authoritative as usual. Skye, however, is glad to see her, but May doesn’t recognize her as Daisy. She leaves her station for the briefing leaving Jemma’s profile on her screen.

The show didn’t make us wait regarding what happened to Jemma. Last episode, we were shown her tombstone leaving viewers asking, was Jemma instantly killed upon entering the framework? Apparently not as she breaks through her grave lying on top of her own ‘corpse.’ At some point in time, Jemma’s counterpart was murdered unbeknownst to Fitz. Jemma leaves her grave site and hitches a ride in a woman’s car. They encounter later a roadblock which is an Inhuman checkpoint and Jemma is forced to leave the car because everyone in this reality is required to carry their HYDRA issued IDs except her ID is SHIELD.

Back to Skye, the briefing turns out to be about an Inhuman detainee named Jason Rajan who Skye knows for a fact is Vijay Nadeer. Skye and Ward are given the job to interrogate him after Skye showed some interest. Skye outs Nadeer because she’s prompted to by May and accuses Nadeer of conspiring with a HYDRA insider because of Vijay’s perfectly made fake ID.

Jemma meanwhile goes into a diner and tries to swipe a car and a disguise but immediately gets picked up by a couple of HYDRA agents but manages to get away. The scene then goes to Coulson teaching several students, social studies or history perhaps. He then explains the reason for the Inhuman persecution and points to an incident known as the Cambridge Incident which involved the little girl that May was forced to kill in Bahrain. The girl apparently used her powers to kill inside a classroom. SHIELD took he fall for the incident, and HYDRA stepped in. One of his students questioned Coulson about HYDRA’s Nazi roots, but Coulson angrily corrected him and threateningly held his shoulder which showed viewers how different Coulson is in the Framework just like May. Two men suddenly stepped in asking for a suspected Inhuman student and Coulson casually surrendered him.

We switch back to Jemma on a park bench and took a device hidden beneath a stone. The bench is hers and Daisy’s assigned meeting place in the Framework. She marks the bench as a sign that she’s okay. She goes back to the HYDRA agents’ car which she stole and looks up the rest of her team and finds Coulson and goes to see him. Coulson doesn’t recognize her as he apparently didn’t sign up with SHIELD. It was revealed before by the Coulson LMD that one of Phil’s regrets was signing up with SHIELD and giving up a normal life. The same as with May. May’s biggest regret was killing the little girl in Bahrain which is actually the basis for the Framework’s reality since May is the framework’s first subject. Jemma emotionally tries to make Coulson remember to no success but tells him about TAHITI prompted by a Hawaiian statuette. The statuette suggests that TAHITI is embedded in Coulson’s subconscious. Jemma fails and leaves, and Coulson reports her.

Jemma encounters Coulson’s subversive student who vandalized the agent’s car. She convinces him that she’s on the good side and the student gives her his car. The student suggests the existence of a resistance movement which he’s willing to join. The exchange, however, was witnessed by a drone. Remember the drones Fitz brought along on missions? They’re now everywhere.

Back to the Triskellion, Vijay is subjected to one of Fitz’ torture machines. Skye tries to rouse Fitz’ humanity but fails. May comes in and reports to Fitz about the events at school which makes Skye aware of Coulson and Jemma. Fitz orders May to investigate with all resources available. Skye also goes out to do the same thing but is confronted by Ward. She brushes Ward off by acting on what Ward said earlier about wanting space in their relationship.

Back to Coulson, he looks back on some memories and looks up Tahiti but sees nothing but a paper containing nothing but ‘It’s a magical place’ repeated over and over. There’s a nod to season 1 about his violinist girlfriend and a picture of a car resembling Lola.

Skye goes to the park bench and happily meets up with Jemma. It turns out that Ward followed Skye and points a gun at them. He suggests that Jemma may be in the resistance but both deny it. It turns out that Ward is actually in it and may be the mole within HYDRA that Skye suggested earlier. It seems that in whatever reality, Ward has a problem with the governing authorities and is on the opposing side. He helps the girls evade capture by HYDRA agents. Ward said he had Skye screened for Inhuman DNA and has been protecting her ever since.

They decide to leave the Framework to come back later using the device Jemma picked up, but it didn’t work. It turns out that AIDA anticipated their arrival and messed with their plans. They’re now trapped in the Framework.

Now for the attractive looking part of the episode. Mallory Jansen is now Madame Hydra. The mysterious woman Fitz was ushering out of the car. Madame Hydra, if she’s actually AIDA, appears more human and undoubtedly prettier with the hair and dark green attire. Fitz wanted to see the video about the events involving Jemma but gets denied. Madame Hydra/AIDA is preventing Fitz from knowing about Jemma which could trigger his humanity, but AIDA also seems to have developed an attraction for him as shown by their kiss. Lastly, Coulson heads home in his car but is confronted by Daisy in the backseat. Daisy forces him to remember. Without her mentioning her name, Coulson remembers.

Events happened rather quickly in this episode as it tries to be worthy of a season starter. The end scene shows that the show doesn’t waste any time dragging things around by making Coulson remember himself immediately and by having Ward play a significant part in the plot. It seems by bringing Ward back, the show suggests that Daisy is still reeling from Ward’s betrayal in Season 1, or it could be just AIDA messing with our heads. The Framework does not acknowledge the events of the Avengers film ad Phil didn’t get around to assembling them and that the ‘incident’ refers to the Inhuman child from Bahrain and that incident somehow erases the MCU. The case of the child too also makes a play on the issues regarding the chaos of immigration policies in our world. Not tethered to the MCU, writers are free to do whatever they wish, but this disconnects the show from the MCU more than ever before. That aside, this episode is fast, this episode is great and scary, and hopefully, the others are just as good.