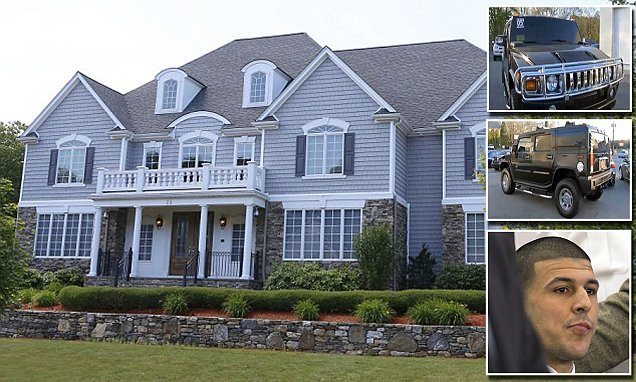 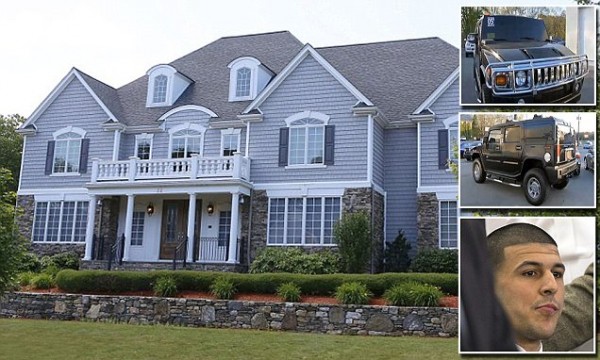 Former New England Patriots star and now convicted murderer, Aaron Hernandez has put his North Attleboro sprawling mansion up for sale leaving local realtors divided on their reactions. Some think that the notoriety may help sell the house to people who like that while others feel that there are just too many bad memories for someone wanting to live there.

“You’re looking at a million-dollar home, so it’s going to appeal to a certain buyer anyhow,” said Chris Rapacioli, a real estate agent at Coldwell Banker in Sharon. “There is going to be people who want to buy it simply because of the fact that a New England Patriot owned it and because of all the excitement around that. But then I think it will also deter other buyers … because there will be the fear of fans camping outside the property and things to that effect.”

The Colonial-style, 7,100-square-foot home on Ronald C. Meyer Drive is in the desirable Westwood Estates subdivision. It boasts five bedrooms and bathrooms, two half-baths and a three-car garage on a nearly half-acre lot. The open-floor-plan home has a two-story family room with a balcony, gourmet kitchen and movie theater. There’s also a four-season room overlooking a gunite pool with a waterfall, built-in grill and pool house.

“It’s definitely an elite community,” Rapacioli said. “It’s a very hot market right now. There’s not a lot of inventory. I certainly wouldn’t mind getting that listing …(because of) the attention that is going to be on the property and, quite frankly, the price point.”

Last week, a Bristol Superior Court judge ruled Hernandez could sell the home and his Hummer after his lawyers and those for Ursula Ward, Lloyd’s mother, filed a joint motion requesting the sales. Proceeds will be held by the court for distribution. Ward, on behalf of Lloyd’s estate, has an attachment on the house up to a value of  $5 million.

The estates of Daniel de Abreu and Safiro Furtado also have $5 million attachments on the home. Hernandez is accused of killing them in Boston’s South End.

Kenny Farrow, of  RE/MAX Real Estate Center in North Attleboro, sold Hernandez the home. “I don’t think him being there and owning it is going to make a big difference,” he said. “The house is the house. The value is the value.”

Ed Pariseau, of Century 21 Ed Pariseau in North Attleboro, expects brisk interest: “It’s a beautiful home in one of the most desirable areas around.” But, he said, “I don’t think that anybody is going to buy that house because of the celebrity status of it. Ultimately it’s going to come down to whether (it) fits a family’s needs just like any other property.” 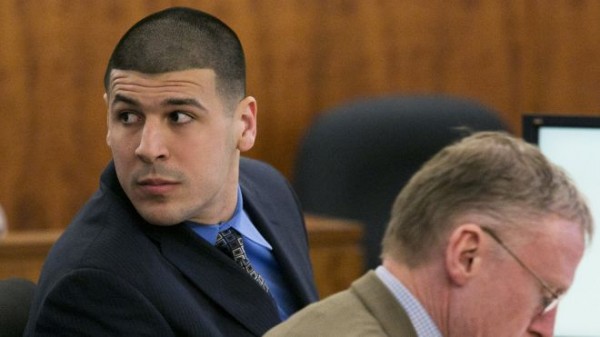 Prosecutors say in new court documents, is that the woman lied about several things, including her name and her job, as well as the fact that she has had a long-running “sexually explicit” relationship with the former New England Patriots star tight end since his June 2013 arrest on murder charges.

Prosecutors are calling “deeply counter-intuitive” and “wholly unsupported” by facts the claims made by Aaron Hernandez’s attorneys that a woman who tipped them off about a possibly compromised juror is now unwilling to assist the defense.

What the facts show instead, prosecutors say in new court documents, is that the woman lied about several things, including her name and her job, as well as the fact that she has had a long-running “sexually explicit” relationship with the former New England Patriots star tight end since his June 2013 arrest on murder charges.

“Indeed, if one were inclined to speculate about the witness’ motivations, it would seem far more likely to conclude that her initial statements to defense counsel, made under the cloak of anonymity, reflected a desire to help the defendant, with whom she desired to continue a relationship outside of prison, and that her subsequent recantation, once she had been identified, reflected her aversion to committing/being punished for making false statements,” First Assistant William McCauley wrote.