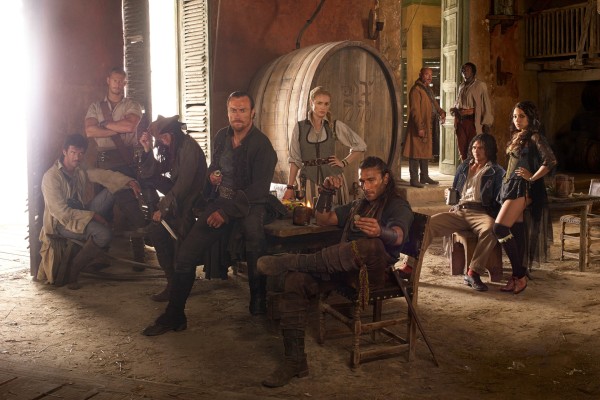 Starz hit show “Black Sails” will be gearing up for Season 3 in early 2016, but two lucky readers can get caught up with a free blu-ray box of Season 2, courtesy of our friends at Anchor Bay Entertainment. You can also pre-order the set too as it makes a great holiday gift!

Black Sails is set about 2 decades before the time of Treasure Island, during what is known as the “Golden Age of Piracy.” This era spanned from the 1650s to the 1730s, when there were notable outbursts of piracy occurring. Many believe this sudden spike in pirating spawned from a rise in valuable products being shipped to Europe, as well as reduced presence of the European navies at sea. The show focuses on Captain Flint, who brings a young crewmember with him as he fights for the survival of New Providence Island. The first episode describes the plot, stating: “In 1715, West Indies, the pirates of New Providence Island threaten maritime trade in the region. The laws of every civilized nation declare them hostis humani generis or enemies of all mankind. In response, the pirates adhere to a doctrine of their own…war against the world.”

The show stars Toby Stephens, who is known for his role as Bond villain Gustav Graves. Actress Jessica Parker Kennedy, who has appeared on such TV series as Smallville, Undercovers and The Secret Circle, also has a reoccurring role on the show.

On November 3rd, STARZ will be releasing the thrilling second season of the series to Blu-ray and DVD. In a three-disc set containing all 10 episodes and exclusive extras, you will be able to catch all of the Black Sails action.

The disc set includes a “Man O’ War” bonus feature that goes behind the scenes of the show and gives audiences a chance to hear the cast and crew discuss the incredibly accurate full-size Spanish Man O’ War ship that was built for the series.

To Enter For Your Copy of Black Sails: We keep it really simple for you and won’t make you jump through hoops. Just RT the Tweet below. See, we even put the tweet right there so you just push a button for your shot. We’ll choose our two winners on Tuesday November 2, 2015.

Make sure to grab a copy of Season 2 of Black Sails when it is released on November 3rd and keep an eye out for Season 3 when it returns to STARZ in January 2016.

Congrats to Caleb L & Martin W for winning the box set. We’ve notified you on Twitter and how to claim your sets!