With Halloween just around the corner, it’s time to get you all something to sink your teeth into like “Scare Campaign,” and three lucky readers will be able to get their own free copy to check out thanks to our friends at Studio71. Check down below on how to get your free one.

“Scare Campaign” will be hitting iTunes, Amazon and Google Play on Oct 24 so you won’t have to worry about it not playing in a theater near you. It’ll be available to everyone at he same time.

The film is from brothers Colin and Cameron Cairnes who were behind 2013’s critically acclaimed “100 Bloody Acres,” and the clip below will give you a taste of what the film’s about.

The brothers talked about the inspiration behind the film:

“[Scare Campaign] really evolved from us watching YouTube clips – stuff where elaborate pranks get a bit out of hand, where people are really put under duress. There’s a funny one from Mexico that did the rounds a few years back. People enter a lift, the lift breaks down, and then suddenly this ghost girl appears behind them, screaming. People were genuinely freaking out at the sight of this girl! So our idea was ‘what if one of those people, those victims, turned on this girl and the people behind the prank?”

“What if they pranked the wrong guy?” prompts Colin. 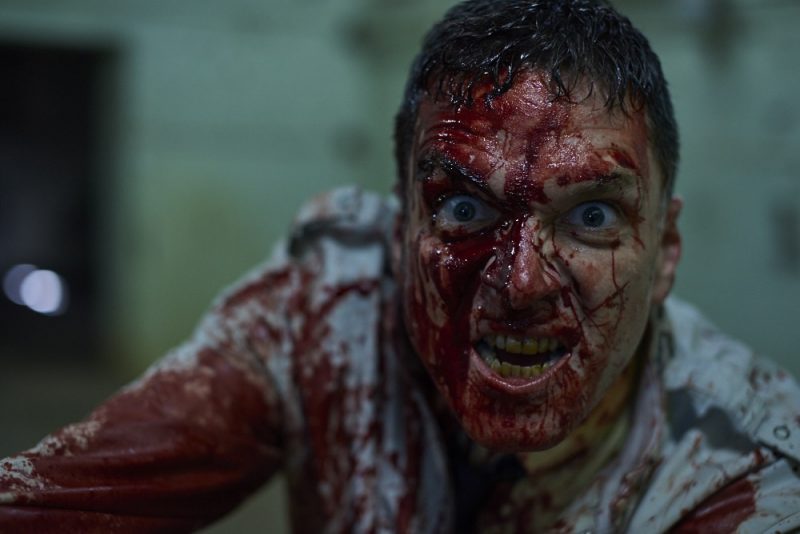 How To Enter the Scare Campaign Giveaway:

Just RT the tweet below for your shot at a copy of “Scare Campaign.” You know we keep it real simple for you so get RT’ing! Contest giveaway run through Oct 24, and we’ll let the winners know after that.

UPDATE: This contest sadly is only for our US based readers. We just found out and wanted to make everyone aware.

The crew of a reality TV prank show facing dwindling ratings decides to up the ante by setting up a terrifying prank in an abandoned asylum.  Things go horribly wrong when they prank the wrong guy.  Brothers Colin and Cameron Cairnes (100 BLOODY ACRES) deliver a night of blood-soaked terror full of twists and turns that will satisfy any gore hound.
View my Flipboard Magazine.