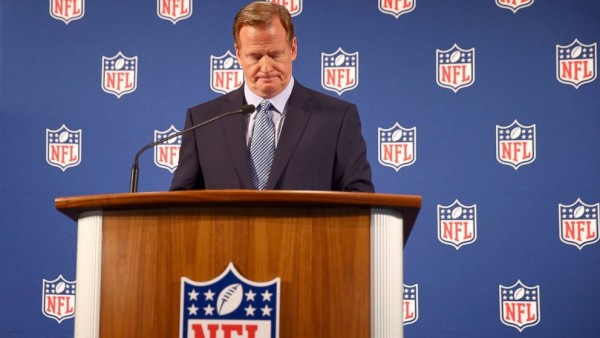 On September 20th, Roger Goodell met with the press to give updates on how the NFL will proceed on domestic violence cases. He not only made a statement but also fielded numerous questions from the reporters on hand. Goodell is feeling pressure from all directions so he had to come out in a public stance at some point. Womens’ groups are calling for his resignation, sponsors are getting nervous about their NFL partnerships, and sports pundits are calling the commissioner out on his inconsistent behaviors. All in all, it is not a good time to be Roger Goodell. And I am pretty sure this press conference did not help his cause.

Usually a guy like Roger Goodell will get a ton of leeway in Q&A sessions with lapdog reporters. Powerful people don’t normally get pressed for the truth when they fail to be open with answers. If you have ever seen a presidential debate or any politician doing an interview, you will know exactly what I mean. Obvious lies and doublespeak are just overlooked by the interviewer generally as a show of respect for the position the person is in.

This Goodell press conference got flipped on its head as reporters actually stayed on the commissioner when he did not answer the question to their satisfaction. Some got down right aggressive with Goodell, which is what they should have been doing all along. Powerful people get by with their sins because of two reasons. Reporters just happy to be in the room with them won’t ask tough questions and demand truthful answers. Also, the American public does not take action on the rare occasions that a reporter with some stones does drag the truth out of a powerful entity or breaks a story worthy of protest. We are happy to just sit back and complain about a corrupt government or corporation, but taking any action would get in the way of our cable TV watching. From this point forward, if the public wants Goodell to be fired then the pressure is on us as NFL fans. The reporters finally have done their jobs. Finally!

In the days since the second Ray Rice video was released by TMZ, several female reporters for the big networks have played a role in chastising the NFL for their lack of concern about domestic violence. Several sideline reporters and other female commentators have laid the wood to Goodell and his lack of real action. During this presser, Rachel Nichols of CNN jumped on Goodell like an angry bulldog and didn’t let up when he tried to bully her. She asked a few pointed questions that made Goodell look like a liar or just incompetent. Her best question was about the “independent” investigator who will be handling the Ray Rice debacle to get the facts about what the NFL actually did or didn’t do. Robert Mueller‘s law firm has ties to the NFL which are a legitimate concern for getting an honest investigation. Goodell tried to shame Nichols for insinuating any disrespect toward the integrity of the former FBI director. But the former ESPN reporter let Goodell know that even if the investigation was completely honest and forthcoming, the appearance of any underhanded dealings would devalue the entire process. By the way, I would guess that about 80% of Americans don’t give any credence to the fact that Robert Mueller is a former FBI director. I just assume anyone that high up in any organization like the FBI is corrupt from his feet up to his dome. Trust me, most thinking Americans feel the same way, especially after the Edward Snowden leaks about government agencies.

Roger Goodell used a pile of words to answer many of the questions. Lots of unnecessary words that were meant to go around the actual questions and eat up time. The main points that Goodell is afraid of are obvious to me. We all know he wants everyone to believe he never saw the second video of Ray Rice. But just as important, judging from his refusal to give a straight answer, is what Ray Rice told him happened in the elevator. The commissioner would just assume go on a drive by with Aaron Hernandez, as tell reporters what exactly Rice told him that led to a mere two game suspension. Whatever was told to Goodell by Ray Rice warranted more than a two game sit out. By stating it out loud, Goodell would make himself look like he doesn’t give a damn about women getting hit…as long as it was just a slap or maybe a punch with his weaker hand. I believe if he were to tell the truth about what Rice said to him directly, he would not recover from the backlash. He hopes to wait it out and let it all die down to save his $40 million a year job with the NFL.

I can imagine the fury that was built up inside the big bully of the NFL as he had to answer a question from a TMZ reporter: “You suspended Ray Rice after our video. Why didn’t you have the curiosity to go to the casino yourself?” Goodell spent about 150 words not answering that one with any honesty. The TMZ guy followed up with this drop the mic question: “Mr. Commissioner, we found out by one phone call. You guys have a whole legal department. Can you explain that?  We found out by just one phone call.” Goodell’s pathetic response to that was, “I can’t explain how you got that information.” The guy just told him how he got the info….with one freaking phone call. He basically just said you didn’t do your job Goodell, and that if you didn’t have the tape it was only because you didn’t want it.

I hope this press conference was not the best idea Roger Goodell had in order to save his job. If it was then he best shine up that resume a bit. He is so used having his way with the media that he thought he could come in and toss a few sound bytes around to satisfy the masses. He was dead wrong this time. At this point in time the NFL is no longer above reproach. An issue bigger than the game of football has finally rocked the boat. The commissioner is learning the hard way about the consequences of being a bully. He was such a stickler for discipline, now he is going to take some of that medicine. How’s it taste commissioner?