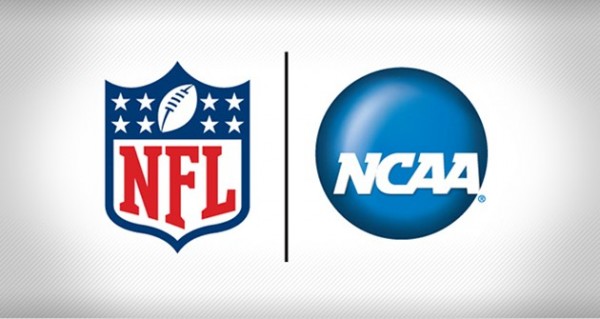 In the south, where I reside, college football gets more love than the NFL. I get it. The college game is a bit more passionate and players and fans are not so jaded about the sport. The NFL can be a cold hard business for fans and players alike. For my money though, I will stick with the NFL for a few reasons.

I could go on for ages about the fairness factor being a difference in college football and the pro league. I am disgusted by the hypocritical people running universities and the NCAA who have gotten over on the athletes for decades now. The profiting off free labor has worn my patience for college athletics in general. But a reckoning is coming due to the Ed O’Bannon case decision. Once the ridiculous appeal is over and denied, I hope to see college athletes get better treatment and be able to take part in capitalism and actually get paid for an autograph if they choose.

There is a lot wrong with the NFL and I am not blind to that fact. In a perfect world, football would not exist. The injuries, the disloyalty of teams and players, and the off the field stuff are not invisible to me. But when choosing the better entity, college or pro football, there is more justice in the NFL. That includes the playoffs.

Some folks may criticize the NFL’s playoff system, but at least they have mathematical guidelines. Teams know what they have to do to get in the post season each and every year. There is no voting involved. In college football, that is all that matters, voting. If a team is way too low in the rankings at the start of the year, they have little chance to make it all the way to the top four spots. And those early rankings are based on nothing. Not a game has been played at that point. Even though the NFL playoffs allow some teams in that are mediocre and happen to be in a weak division, that is still better than some guy voting on who he wants to see in the college “playoff.” I am well aware that the NFC South will send a team to the post season this year with a losing record. That may suck, but at least it was determined before the year with the guidelines. Win your division and you are in. No voter ballot needed.

Another mistake college football makes is the big layoff between the regular season and the bowl games. There is too big a break in between those games. A four week break in the past has been ridiculous and this year’s layoff is only slightly better. A team on a roll can go cold with that kind of layoff. The NFL does not fool with that type of schedule. They get right to the playoffs immediately after the last regular season game, the way it should be.

The NFL may be a bit less passionate than college football, but I will take the justice of the pros over the rah-rah of college games. From paid work to a consistent way to fill the playoff schedule, the NFL is a more fair place to play football. Just a few tweaks could make college ball just as fair as the NFL. All it would take is for the players to demand it. By demand it, I mean sit out games until something changes. They deserve to be paid in some fashion and they deserve a true way to find a champion each year. Baby steps have been taken and more leaps will soon follow. The O’Bannon decision was huge and the Northwestern football team unionizing is progress also. I’m OK with the college game getting turned on its head or even destroyed. I have the NFL.