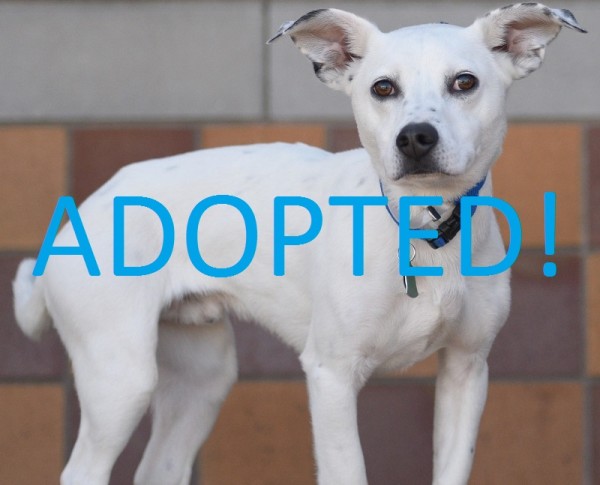 UPDATE: 11/2/2015: 10:00 AM ET. Tickles was adopted! This is now five out of eight pets that we’ve featured that have found happy homes. This is exactly why we teamed up with North Shore Animal League America.

For the past few weeks, Movie TV Tech Geeks has been proudly teamed up with North Shore Animal League America. North Shore is the world’s largest no-kill animal rescue and adoption organization. Since 1944, the organization has worked towards fulfilling the League’s mission: to save lives of pets through adoption, rescue, spay/neuter and advocacy initiatives. To date, the League has successfully placed over 1 million puppies, kittens, cats and dogs into vigilantly screened homes.

This week we are happy to introduce you to Tickles, who is just as cute as his name.

Tickles is a handsome, 2 ½ year old Terrier mix. He was rescued from the New York Tri-State area. Since Tickles is still young, the pint-sized pup has lots of energy and is looking to be the perfect companion to an owner who leads an active lifestyle.

Although he may be young, Tickles’ intelligence and adaptability shines through his ability to follow basic commands, especially if there are treats involved. He prefers to be walked while wearing a harness rather than a collar and will need to be given a bit more training when it comes to walking on a leash.

Tickles is part of the Terrier family, which are known for being relatively small. Although their sizes do vary notably depending on their specific variation. Just as Tickles’ personality and enthusiasm can attest, Terriers are very active and high-energy. Historically, they were first bred and trained to hunt rodents and vermin.

Terriers get their name from the Latin word “terra,” which means Earth. This refers to the breed’s love of digging, which proved to be very useful when they were hunting prey such as moles and badgers.

Due to their hunting past, Terriers have a reputation of being intelligent dogs and are responsive to training. This is shown in Tickle’s ability to learn a range of commands at such a young age. These dogs are often very single-minded, which means that they can often become very concentrated on a particular task, whether that be playing fetch or hunting prey.

Now, back to Tickles!

Tickles’ high energy makes him a great playmate with other dogs, but he often would rather play fetch with a tennis ball with his favorite two legged companion. He is the perfect form of encouragement to get you outside and enjoy various activities, as he will never say no to a walk, run, bike, you name it! With Tickles as your companion, even the most routine of errands will become something you will be looking forward to.

Vanessa Estrada, the Kennel Manager at North Shore Animal League America notes, “Tickles is a really affectionate dog with a lot of energy and will play fetch with you for hours.”

In terms of living situation, North Shore’s staff has determined that Tickles would most likely thrive in a single, adult household, as it will allow him to form the close, strong bond with his adopter that he desires. However, if you are interested in Tickles and already have another dog, North Shore is happy to have you bring by your dog for a “meet and greet” play session and see if Tickles will become friends and be compatible with your current furry friend.

It became evident quickly that Tickles has a lot of love to give and is waiting to find his new family. Christina Travalja, the Shelter Director at North Shore explains, “Once we find the right match for Tickles, the bond he and his adopter share will last a lifetime.”

To inquire about adopting Tickles

Every week we will be featuring an adoptable pet that is looking for a loving home. Through our teaming up with North Shore Animal League America, we are able to feature deserving pets that are looking to be adopted.

This week we are showcasing Spike, an adorable adult Terrier mix who is ready to find a new family!

He originally came to North Shore Animal League America as a puppy. When he first arrived, unfortunately he had a fractured leg. However, after a couple of weeks in North Shore’s medical center, Spike was able to fully recover. Shortly after, Spike was adopted out of the shelter and welcomed into a warm home.

Sadly, Spike’s family moved overseas and was therefore unable to keep him. Therefore, Spike returned back to North Shore’s facility and is now waiting to provide lots of love to a new family.

Terriers are known for being a relatively small breed although there are different variations. They were first bred and trained to hunt rodents and vermin, therefore the breed is known for being active and high-energy. The name terrier is actually in reference to the Latin word “terra” meaning Earth and it signifies their love of digging which was once useful for finding prey such as moles and badgers.

Since they come from a trained hunting past, Terriers are also notably intelligent and are quite responsive to training. They are often very single-minded, meaning that they become very concentrated at the task at hand, whether that be playing fetch or hunting prey.

In addition, this particular breed is also known for being territorial. They are often protective of their homes and loved ones, thus can form very strong bonds with their owners.

Since they often have boundless energy, Terriers are great pets for those with active lifestyles. Their contagious spark makes them the perfect pal to have along on one’s daily walk/run.

While he can be a bit shy at first, once he gets to know you he will never leave your side. In doing so, Spike very much shows the territorial quality of his breed and he promises to be a very loyal companion. Spike loves to give lots of kisses and is a very affectionate dog.

In addition, Spike has already been taught all of the basic commands and is housebroken (meaning he knows to do “his business” outside).

“Having known Spike since his arrival here at North Shore Animal League America, he really has matured and come out of his shell. He likes to play with other dogs and will do tricks for treats. Spike recovered beautifully from his leg injury and now he loves to run and go on long walks. While he may be shy when he first meets you, a few belly rubs will lead to kisses in no time.”

As the pictures (note: the adorable one of him standing was taken by Ellen Dunn) of Spike can attest, he is a curious, adorable and playful animal. Spike’s affection and enthusiasm is infectious and he will surely be the perfect addition to complete any loving family.