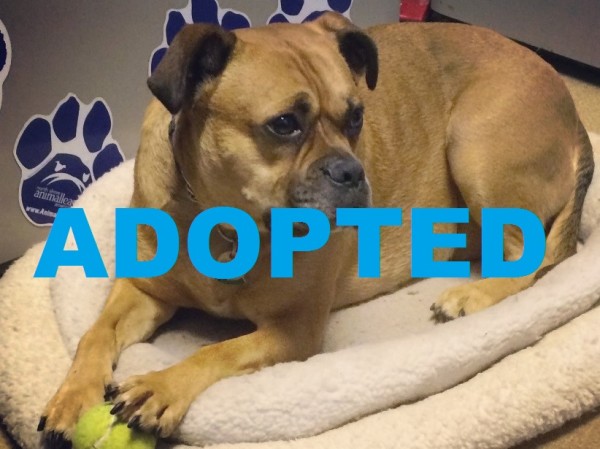 Pippin was adopted this weekend bringing up the number of adoptable pets that we’ve featured on our site under the Rescue Me section to 12 out of 16 finding homes. That’s way more than we ever imagined when we teamed up with North Shore Animal League American back in September. We were hoping that if just one animal was adopted, we’d be happy, but having this many really has us excited and ready to continue on in 2016!

Once again we are pleased to feature a new adoptable pet this week along with some great news. Two of our other featured pets have been adopted: Whispie and Daisy. We’re so glad to be part of raising awareness so these pets can find good homes and enjoy life.

Through our teaming up with North Shore Animal League America, Movie TV Tech Geeks features an adoptable pet every week that is looking for a new home.

To date, North Shore has helped find homes for over 1,000,000 dogs, cats, puppies and kittens.

This week our furry feature is Pippin!

Pippin is a young adult boxer mix. She was rescued from Virginia with six of her own young pups that she was nursing and caring for upon intake. Pippin is a shy dog but has a very sweet personality that is friendly, affectionate and loyal. She has plenty of loveable qualities that make her the perfect addition to a warm and welcoming home.  She is a curious and adventurous dog, who has plenty of energy and loves to play.

Boxers are known for their intelligence and playful energy. They often form strong bonds with their owners, and therefore, prefer to play with their immediate family, rather than with strangers. It is noted that as long as they are given plenty of opportunities to let out their energy, boxers can thrive in a range of housing situations, from large estates to small city apartments.

Female boxers usually grow to about 21-25 inches and weigh from 50 to 65 pounds. They have distinctive square heads and folded ears. Their fur coat is short and sheds light to moderately. Therefore, they are fairly easy to keep groomed, as they only need to be brushed and bathed when dirty or when there is a notable build-up of their natural oils in their fur. They are known for their alert expression, which can make it seem like they are watching for something even when they are at rest.

Christina Travalja, North Shore Animal League America’s Shelter Director notes, “Once Pippin becomes comfortable with you, she forms a bond and is stuck to you like glue. The adorable girl will lick your hands, paw at you or stare at you with her cute and adorable eyes until she gets belly rubs and kisses on her head.”

As a young adult dog, Pippin has already had some training. She is housebroken, meaning she knows to “do her business” outside. In addition, she knows commands such as “sit,” “down” and “paw.

Pippin loves her treats and can often be seen playing with tennis balls. She will happily join you on the couch for a movie night, or jog alongside you during an outing at the park.

Furthermore, Pippin is a loving dog, with an adorable, innocent face that will make you want to squeeze her cheeks whenever you see her. She has plenty of affection to give and will thrive in a home with children 10 and over, that has a relaxing environment that will complement her calm, yet enthusiastic spirit.

To inquire about adopting Pippin