Elliott has found a great new home that is purfect for his tastes.

We are pleased to kick off the month of June with an adorable kitty who is more-than-ready to find his forever home. As many of our readers know, we feature an adoptable pet – cat or dog – every week. Through our teaming up with North Shore Animal League America, we here at Movie TV Tech Geeks hope to help find homes for deserving pets, as well as raise awareness for pet adoption and shelters.

North Shore Animal League America is the world’s largest no-kill animal rescue and adoption organization. For over 70 years, North Shore has been rescuing animals and advocating their proper care. Since opening in 1944, the organization has saved the lives of over 1,000,000 cats, dogs, kittens and puppies.

With their vision, “To put an end to animal cruelty and euthanasia and to create a world in which all companion animals find compassionate permanent homes.” North Shore Animal League America continues to make a positive difference in the lives of countless animals. 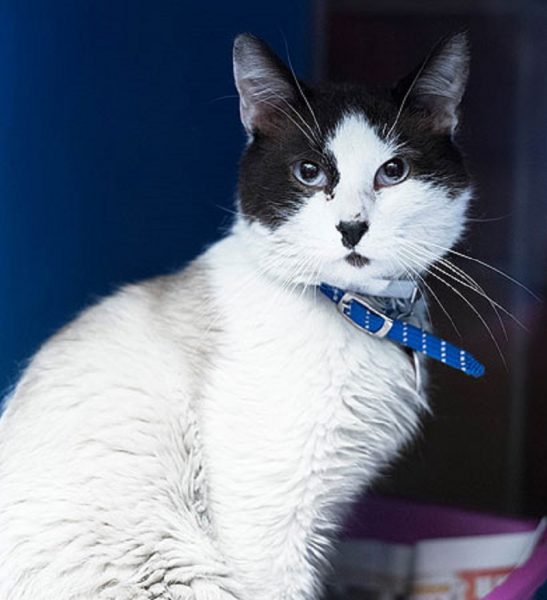 Elliot is a 2-year-old, Snowshoe-mix shorthaired cat. He has notably unique markings, which stem from the connection his breed has with the Siamese. Elliot has a mainly white coat of fur but also has several darker seal and blue patches of fur dispersed across his coat. His adorable black button-nose is perfectly complemented by his large, captivating blue eyes. Rescued from upstate New York, he is anxiously waiting at North Shore’s adoption center for someone to give him a permanent place to call home.

It has been said that pet owners smile more, laugh more and form special friendships with other animal owners and lovers. Elliot will surely bring such improvements to his new owners’ lives.

Rosie Tombolo, the Kennel Manager at North Shore Animal League America notes, “Elliot has a friendly and laid back disposition. His calm demeanor would make him an ideal candidate for an older couple that is looking for a lap cat or a calm household with older children interested in a four-legged companion.”

During his stay at North Shore’s campus, Elliot has managed to make a few feline friends. Therefore, the staff believes that he would be able to adapt to a home with other four-legged friends roaming around.

Elliot’s warm-heart and affinity for cuddling makes him the perfect pal to cozy up next to on the weekend. In fact, having his soft fur and whiskers in your face will make even Monday mornings just that much more bearable. This little cutie has plenty of affection to give and is ready to begin the next chapter of his life. Undoubtedly, he will bring both joy and love into his new home and form a bond with his family that will last forever.

If you are the one to give Louie a much better life than she previously knew, please contact Kennel Manager, Jessica Uster at JessicaU@animalleague.org for more information.