“Game of Thrones” Oathbreaker was the best episode of this young season even though everything played out as one would expect. I’ll get to Jon Snow’s confused state as he is resurrected, but first, some tidbits to warm us up. 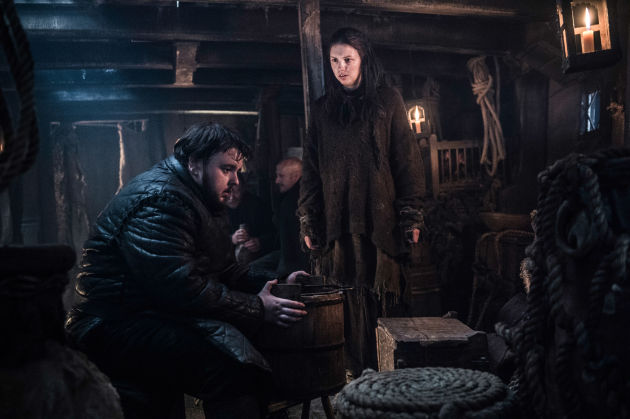 Jon’s buddy Sam has a bad case of seasickness on his way to the Citadel. He plans to drop his lady and her baby off at his parents home even though she’s stubborn about it but finally agrees to what he thinks best.

Daenerys has been a side note so far this year, so I can see her getting the bulk of attention in the next couple episodes. Her fate is up in the air with the widows at the Kahl’s temple. Running off to conquer the world is frowned upon apparently so she may be punished instead of being allowed to hang out with the other miserable looking ladies. 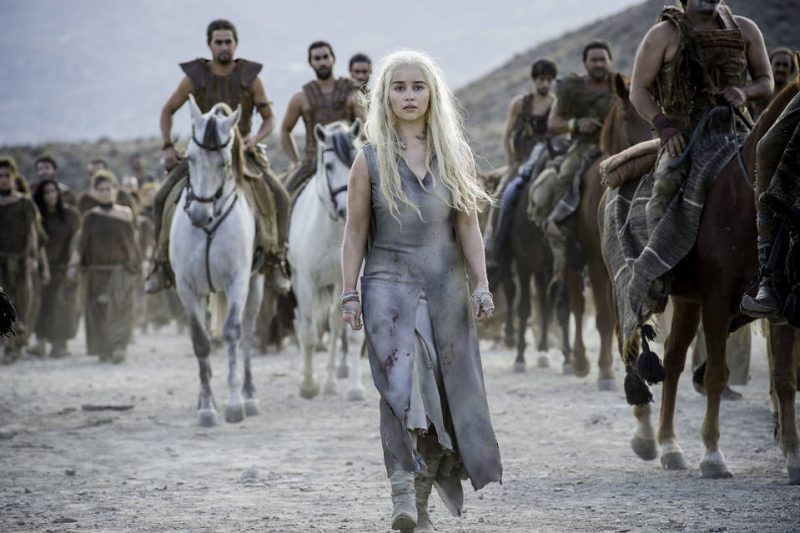 Varys is doing some good work for her while she’s away. He’s figured out the masters of three cities are paying the Sons of the Harpy to cause all the chaos. This intel was welcomed by Tyrion, who was having the most uncomfortable drinking game ever with Grey Worm and Missandei.

Over at King’s Landing, the mad scientist Qyburn has taken over the little birds that were informing Varys before he fled the city with Tyrion. 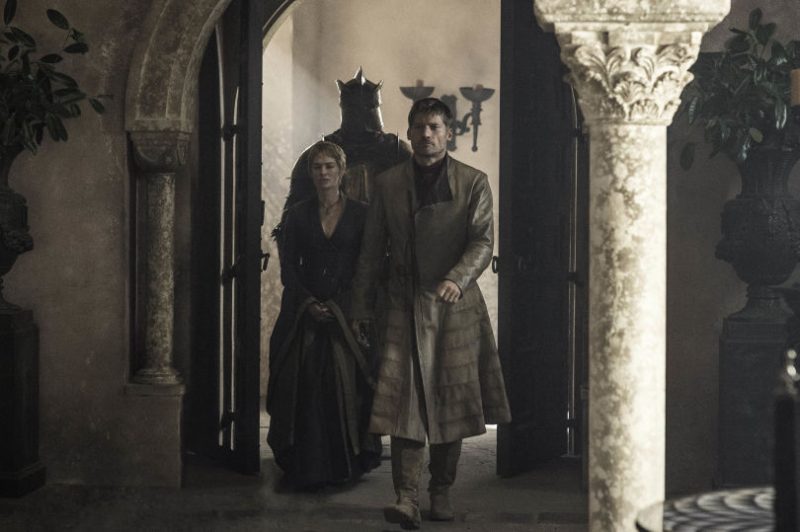 Jaime mentions a “trial by combat,” so it sounds to me like The Mountain will have another chance to rip someone apart on a big stage. This time for a noble cause….to free Margaery from the Sparrows.

Unfortunately, The Mountain didn’t rip the face off of Grand Maester Pycelle for suggesting the creature be disposed of. The big zombie does realize what’s going on around him as we saw when Jaime made a nasty little comment about him.

The Small Council wants no part of the input from Jaime or Cersei. Her uncle and Margaery’s grandma make it pretty clear as they lead the rest of the council to exit even though Jaime makes a good case for them all working together to do something about the Sparrows and Myrcella’s murder.

Finally, Tommen shows some backbone this week when he demands the High Sparrow let Cersei visit his sister’s tomb. There’s a face-off that eases off, and the wily old man begins to manipulate the little king. He is making Tommen believe that he’s just trying to do the right thing by the gods when it comes to punishing Cersei, who is not off the hook after all.

She is still to stand trial…..never gonna happen.

Is it possible Tommen becomes a Sparrow himself? That may be Cersei’s breaking point if so. 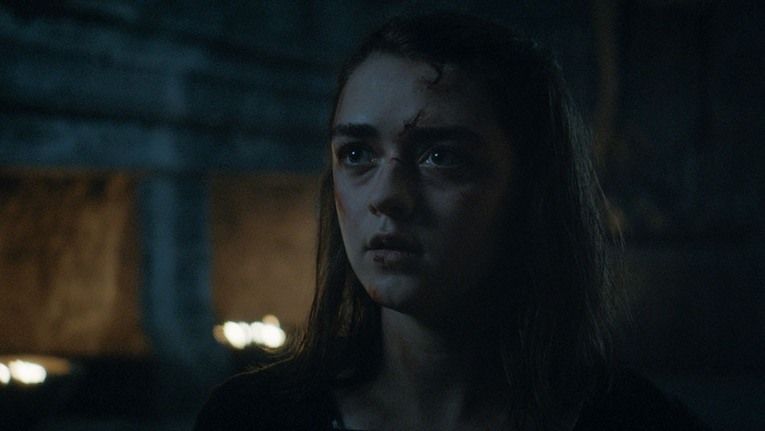 The beatdowns for Arya continued back at the House of Black and White. She’s off the streets but is now getting the same abuse indoors. She is improving though and finally gets the advantage on the girl training her. Her reward for keeping with the “no one” theme is getting her eyes back from Jaqen H’ghar.

Arya is finally seeing the power of being no one. There’s no fear when you are nobody, with no connections to anyone. No weakness to exploit by your enemies.

There was a bit of a surprise with Ramsay being presented with the Wildling woman and Rickon Stark as hostages. Another direwolf has bit the dust too as his head is dropped off as well. Could this be a set up by the man who handed over the hostages?

If so, it’s a risky move seeing as how Ramsay could kill the Stark boy in a matter of moments. 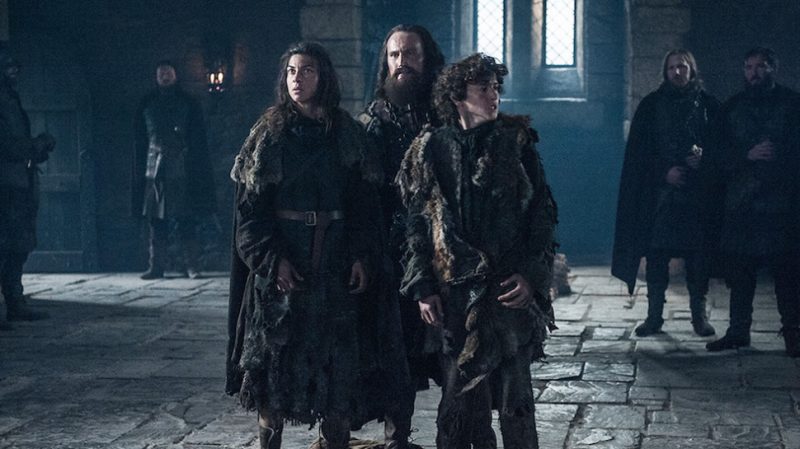 Bran Stark’s story has finally become interesting, although it’s really the story of Ned in his youth that’s compelling. This week’s flashback shows Ned leading a group in a fight against the greatest swordsman he ever saw according to Bran.

The fight scene was amazing, with Ned’s group getting cut down one after one. Finally, Ned is facing the soldier alone and should have been killed. But it was a young Jaime (from what I could tell) who saved him when he stabbed the man in the back before he could kill Ned.

The fact that Ned could sense Bran’s presence in the flashback is really confusing. Is the Three-eyed Raven a time-traveling creature, capable of changing outcomes in the past?

Bran doesn’t get to see what happens as Ned races up the tower to save his sister Lyanna Stark, who’s screaming. This blast from the past could unlock big secrets as to what lead up the chaos that enveloped Westeros as season one began.

Now for Jon Snow’s revival. Dude is confused as hell. He remembers what happened all too well though.

“They stuck me. Olly put a knife in my heart. I shouldn’t be here,” he tells Davos.

As for his experience after his life ended? “Nothing,” he tells the best doctor in Westeros, Melisandre. She’s disappointed at that report of course.

Davos sympathizes with Jon’s confusion. First, he gets murdered for doing the noble thing, then gets resurrected from death by a witch. Dude feels like a failure, but I’d say he’s doing pretty well seeing as he shouldn’t even have a pulse.

If his god-like status was gonna go to his head, Tormund made sure that didn’t happen. Telling Jon his tiny pecker couldn’t belong to a god, helped John lighten up a bit as he showed himself to the Wildlings and his remaining friends.

At this point, Jon seems to be himself. Same good guy and no ill effects of the dark magic that revived him. We’ll see if that holds up.

There has to be a cost for cheating death.

There’s definitely a cost for murdering a man that comes back to life afterward. The victim is a great eyewitness.

Jon is going to punish the men who stuck him. Olly, though just a boy, is no exception. How can he let these murderers remain alive and have any peace of mind? Cheating death once is a miracle, and Jon doesn’t want to see if he can do it again.

Hanging would be the sentence for Thorne, Olly, and two others. Thorne wasn’t remorseful at all and said he did what he thought right, and lost. Another guy pitifully said, “It’s not right,” about Jon being back among the living.

Maybe not, but it is reality.

Olly had nothing to say and the frozen look on his face after his death at the gallows was terrible. The boy only did what he thought was right after Jon let the people who murdered his family walk right past the Wall. Still his role in the murder couldn’t be unpunished. 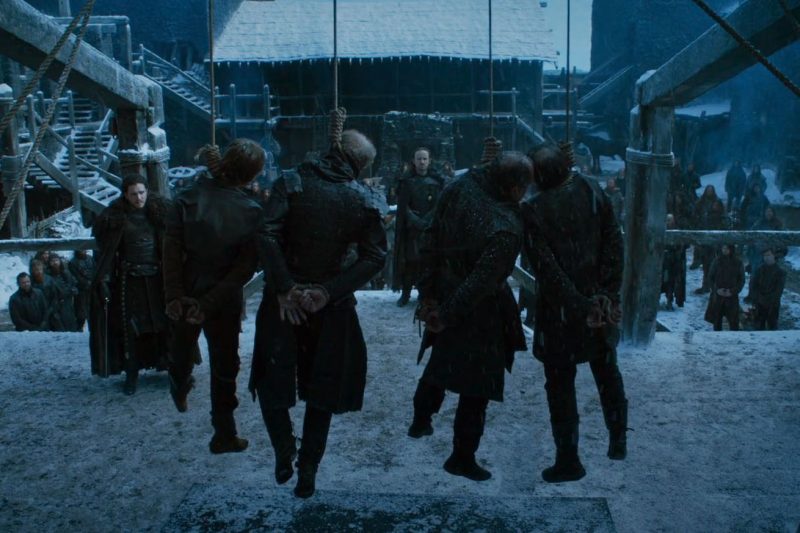 After the death sentence, Jon hands over leadership of the Wall to his buddy. “My watch has ended,” Jon tells him as he walks away.

His oath was for one lifetime, just as the guys over at Bald Move suggested on their podcast. Jon is now free to do as he pleases. That may involve looking for his remaining siblings.

He could raise an army or just become a hermit.

Or he can just start a relationship with the Red Woman. I’m sure she would be down for that since she believes Jon is the conqueror that she thought Stannis to be.

Jon Snow has his whole life ahead of him….for the second go round.