Luis Enrique has extended his contract at Barcelona for two more years which will keep him at Camp Nou till 2017. In his debut season at the helm of the five-time European champions, Luis Enrique has achieved what most coaches crave for, throughout their tenure. The Spaniard spearheaded the Catalan giants to their second historic European treble.

At the commencement of the 2014/15 season, no one expected Barca to finish the season on such a high note. Tata Martino’s successor was expected to take some time to settle in at Camp Nou but Enrique was no stranger to the club and its philosophy. The new signings Ivan Rakitic and Luis Suarez added more quality to the truly exceptional strike force of the Blaugrana giants. Some reports regarding a rift between the Barcelona boss and Lionel Messi surfaced at the start of this year. It was anticipated that either of the two most important people at Barcelona will leave at the end of the campaign. Yet now the storm seems to have passed and celebrations have taken over.

Pep Guardiola is the most successful coach in the history of the club. The Bayern Munich boss won a host of trophies in his short stint at his beloved club. But can Luis Enrique bring back those days of domination in both La Liga and Europe? His start couldn’t have been better and his current squad is more than capable of replicating similar success. The La Liga champions can’t buy any players in this summer transfer window because of a ban on their transfer activities until January 2016. The club legend Xavi has decided to move on to his next destination – the Qatari club Al-Sadd. Although, Dani Alves has renewed his contract until 2017 thereby trashing the rumors linking him to PSG and Manchester United. 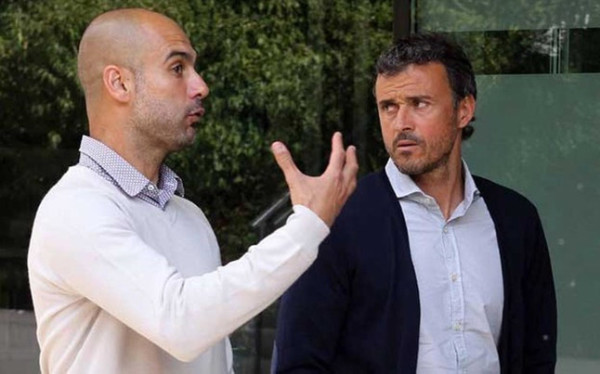 Barca’s attacking trio bagged a total of whopping 122 goals in all competitions and that too their Uruguayan forward didn’t debut until late October. MNS (Messi, Neymar and Suarez) are being compared with the most lethal strike partnerships in the history of the game and they can certainly continue to break records in the coming season. Luis Enrique’s team plays a more attractive and attacking brand of football compared to a few years ago. They’ll always attract players of finest quality once the ban is over and they can certainly challenge on all fronts in the 2015/16 campaign.

Although Pep Guardiola’s Barcelona is amongst the best soccer teams the world has ever seen. They are ranked alongside the great Real Madrid, Manchester United, Bayern Munich and Brazilian sides. Lionel Messi and co. achieved greatness during Guardiola’s term and have their names immortalized alongside the greats of the game. It’ll be a very big achievement for the Spanish coach if he manages to replicate success at par, if not more, than that of Barca 2008 – 2012 .

As far as Messi goes, he’ll definitely attain greater heights and by the time he hangs up his boots, he’ll be spoken of in same breath as Pele and Maradona. Earlier this week, Ronald Koeman said, “For me, Messi is the best player of the past 50 years. There is talk of Pelé, Cruyff, Messi, Maradona … for me no one has been as decisive [as Messi]. He’s the greatest player of all time.”